In 1968, SEALs serving in South Vietnam reported to the Navy that they needed more firepower. Back in the United... 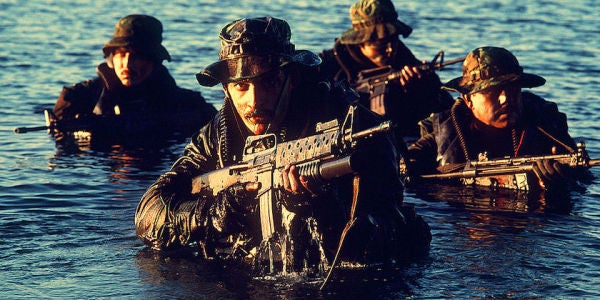 In 1968, SEALs serving in South Vietnam reported to the Navy that they needed more firepower. Back in the United States, the service’s engineers rushed to help, crafting various weapons and accessories, including some particularly weird looking magazines.

Task & Purpose had the opportunity to take a closer look at these rare prototype “Mod 1” and “Mod 2” magazines behind the scenes at the Naval Heritage and History Command in Washington, D.C. The design aimed to give special operators more ammunition at ready inside a reliable package that could stand up to combat.

According to noted SEAL historian Kevin Dockery, the major impetus was a desire for “sustained” fire from a standard M16 rifle. “This was needed especially to maintain the high volume of fire during the first crucial moments of enemy contact,” he wrote in his book “Special Warfare Special Weapons.”

At the time, the rifles came from Colt and other sub-manufacturers with a small 20-round magazine. The Hartford, Connecticut-based gun maker had been working on a slightly larger 30-rounder, but didn’t expect to deliver it to the U.S. military in bulk until 1969.

At the Naval Weapons Laboratory in Dahlgren, Virginia, engineers drew up plans for a more immediate solution. Chief among them was Carroll Childers, who spent nearly three decades cooking up weapons — including futuristic shotguns and more — for the Navy, all while also serving as an officer in the Virginia Army National Guard. He ultimately retired as a major general.

The strange markings on the Mod 1.Photo by Joseph Trevithick.

Childers, along with fellow engineer Joseph Manolo, proposed an all-new 50-round magazine that would fit both the SEAL team’s M16 rifles and their shorter XM-177 submachine guns. Colt had already sent along a dubious prototype of its own consisting of three 20-rounders someone had welded together at the ends and a longer spring to push them all up to the top.

“The major engineering problem with such a long magazine is the spring pressure needed to lift the heavy column of cartridges into the rifle,” Dockery noted. “Too heavy a spring and the last rounds loaded will be difficult to insert into the magazine, too light and all the ammunition will not feed into the weapon.”

Colt’s design suffered from the former issue. Evaluators couldn’t load the last few cartridges without some sort of special tool and the magazine put such pressure on the rounds that the mechanisms in a standard M16 couldn’t even ram them into the gun’s firing chamber.

On top of that, the spring had trouble navigating the odd angles in the spot-welded magazine, causing it to jam regularly during tests. While the Navy dutifully sent them to South Vietnam, SEALs had no confidence in the product.

Childers and Manolo looked at Colt’s initial attempt and came up with the entirely different Mod 1. The engineers took the bottom off a 20-round magazine and added an entirely new lower section.

The new 50-round unit looked like cartridges would fall right out its open bottom. But rather than using a coil spring pressing against a hard floor plate in the magazine, the new constant-force types simply rolled down from the very top as someone added more cartridges.

They looked “much like the coiled springs in a clock movement,” Dockery wrote. “The constant-force springs would unwind as the magazine was loaded, keeping the same pressure on the last rounds loaded as on the first.”

Technicians at Dahlgren only built 10 of the Mod 1s, including the one we took a picture of at the Navy Yard, which features an odd symbol someone scrawled on one side of the frame. None of these made it to Southeast Asia.

The Mod 2 magazine.Photo by Joseph Trevithick.

We also got to take a look at one of just over 40 Mod 2s that came next, in which Childers and Manolo stopped using any parts from Colt’s original magazines. Among other internal improvements, the new version tweaked the curvature of the design to help the cartridges move up smoothly in sequence as a shooter fired the rifle.

The Navy gave nearly 30 of these magazines to SEAL Team Two in the Mekong Delta, according to Dockery. Another five went to other special operations units in South Vietnam.

While definitely an improvement over Colt’s magazines, the elite sailors remained unconvinced about the long, bulky magazines that extended far below their guns and made it hard to lie prone. In addition, they reported that the springs still did better with a lighter load of 45 cartridges rather than the full 50 rounds.

Childers and Manolo did design further improved Mod 3 magazines based on these responses from the field, but there wasn’t an example in Washington. By the time these prototypes appeared in the 1970s, the United States was working to extricate itself from Southeast Asia and the Navy ultimately scrapped the entire project in the face of post-war budget cuts.

In the end, the SEALs mostly stuck to Colt’s 30-round magazines in their M16 rifles and later carbine variants, including the now ubiquitous M-4. Starting in the Vietnam War, the elite troops instead began acquired special purpose light machine guns, like the famous Stoner 63, to provide the sustained firepower they craved on patrols.