6 Takeaways From The Presidential Debate

Hillary Clinton and Donald Trump clashed in their second debate Sunday night in a flurry of biting and personal attacks... 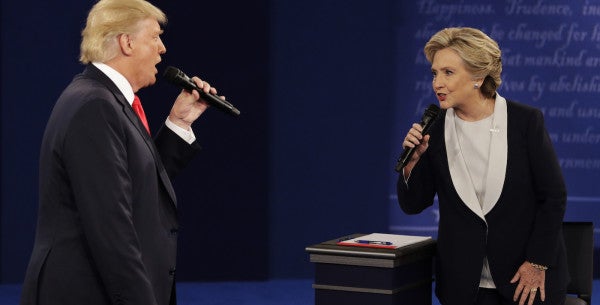 Hillary Clinton and Donald Trump clashed in their second debate Sunday night in a flurry of biting and personal attacks over regulating taxes, Russia’s role in Syria, and even which of them pushed the idea that President Barack Obama wasn’t born in the United States.

The faceoff came as Trump, the Republican nominee, worked to save his candidacy after a lackluster debate performance last month and the defection of many Republican leaders following the emergence of a video that showed him bragging about crude sexual advances on women.

Trump needed to be contrite about the video while showing a discipline in his attacks on Clinton that he has largely lacked on the campaign trail. But while he apologized for his remarks on the 11-year-old video, he frequently appeared agitated, pacing the stage and snapping at the debate moderators, CNN’s Anderson Cooper and ABC’s Martha Raddatz. At one point, he accused them of being on Clinton’s side. “It’s nice, 1 on 3,” he said.

Clinton strove for a repeat performance of last week’s debate where she successfully and repeatedly baited Trump. She mostly succeeded, saying over and over that Trump was lying and lives in an alternative reality.

Here are six takeaways from their time on the stage together:

Trump showed little contrition over the leaked video, which had him in his own voice bragging about groping women’s genitals and kissing women, including a married woman he said he tried to seduce. Instead, he repeated that his comments were “locker-room talk” that he’s not proud of and tried to divert attention by bringing up allegations of sexual abuse against former President Bill Clinton.

“If you look at Bill Clinton, far worse,” Trump said. “Mine are words, and his was action. What he has done to women, there hasn’t been anyone in the history of politics in this nation that has been abusive to women … Hillary Clinton attacked those women.”

Clinton countered that what people saw and heard on the video “was Donald talking about women — what he thinks about women, what he does to women.”

“He has said the video doesn’t represent who he is,” she continued. “But I think it’s clear to anyone who’s heard it, it represents exactly who he is.”

Moderator Cooper asked Trump multiple times whether he had ever groped women in the way he discussed in the video. Eventually, he responded, “No, I have not.”

Trump made good on his promise to go after Bill Clinton for sexual misconduct. And he went a step further — lashing out at Hillary Clinton for attacking the women who accused her husband of improper behavior, dubbing her an enabler.

Clinton didn’t address the allegations against her or her husband, saying she was taking first lady Michelle Obama’s advice: “When they go low, you go high.”

Bill Clinton was never found guilty of any assault. He has apologized for being unfaithful to his wife, including with a White House intern, Monica Lewinsky, but he has denied various allegations that he groped and raped other women. Three women who have accused Bill Clinton of sexual impropriety were in the audience as Trump’s guests.

Trump dropped calling Clinton by the honorific “secretary” as he did in the first debate. He swatted away Clinton’s comments as “just words.”

“I’ve heard them where Hillary is constantly talking about the inner cities of our country, which are a disaster education-wise, job-wise, safety-wise, in every way possible. I’m going to help the African-Americans. I’m going to help the Latinos, Hispanics. … She’s done a terrible job for the African-Americans. She wants their vote, and she does nothing, and then she comes back four years later.”

Clinton countered by continuing to attack Trump’s temperament, repeating a line that Trump lives in his own reality.

“And it is sort of amusing to hear somebody who hasn’t paid federal income taxes in maybe 20 years talking about what he’s going to do,” she added.

Trump sought to portray Clinton as duplicitous, using the recent publication by the anti-secrecy website WikiLeaks of transcripts of her paid speeches to note that she said one thing to a Wall Street audience and another to the voting public.

In responding to a question from Raddatz, Clinton acknowledged the authenticity of the WikiLeaks’ transcripts, noting that the speech she was being asked about had been about President Abraham Lincoln.

“And, yes, President Lincoln was trying to convince some people, he used some arguments, convincing other people, he used other arguments,” she said. “That was … I thought a great display of presidential leadership.”

Clinton attacked Trump on Syria, accusing him of being too enamored of Russian President Vladimir Putin. Trump said the Syrian city of Aleppo has “basically fallen” and blamed Clinton and Obama for what he considers a feckless policy.

Trump clarified one key point, saying he disagreed with his running mate, Gov. Mike Pence of Indiana, on Syria policy. Pence, in last week’s vice presidential debate, had called for establishing safe zones and no-fly zones in Syria, even if it risks provoking Russia, an ally of Syrian President Bashar Assad.

“I disagree,” Trump said Sunday. “I think we need to knock out ISIS,” referring to the Islamic State by a common acronym.

Clinton countered that “Russia hasn’t paid any attention to ISIS.”

“They’re interested in keeping Assad in power,” she declared.

Trump confirmed that he had used a $916 million loss from his 1995 income taxes to avoid paying federal income taxes for several years, though he declined to answer a question from moderator Cooper about how many years he’d been able to do that.

Asked by an audience member how he would make certain that the wealthy were paying their fair share of taxes, Trump offered only the repeal of the so-called carried interest provision that allows hedge fund managers to be taxed at just 15 percent on their earnings. He did not mention the loophole that had allowed him to use real estate losses to avoid federal taxes for perhaps 18 years.

Clinton said the $916 million loss proves that Trump isn’t the savvy businessman that he claims to be — attacking Trump’s central claim of his campaign that he’ll accomplish for Americans what he accomplished as a tycoon in the private sector. In responding to the question about taxes, Clinton promised to raise rates on the wealthy and consider a surtax on incomes over $1 million, and she pledged that families earning $250,000 a year or less would see no increase in taxes.

Trump was at his most aggressive on the question of Clinton’s emails, raising the topic several times and vowing, if he’s elected Clinton could well find herself in jail.

“If I win I am going to instruct my attorney general to get a special prosecutor to look into your situation,” he said.

Clinton once again acknowledged the controversy over her use of a private email server while she was secretary of state. “That was a mistake and I take responsibility for using a personal email account,” she said.

But she tried to impugn Trump’s temperament in recalling that the Justice Department had declined to press charges in the case after a monthslong investigation.

“It’s just awfully good that someone with the temperament of Donald Trump is not in charge of the law in our country,” she said.

“Because you’d be in jail,” Trump responded.

Clinton found herself on the defensive when Cooper asked her about her husband’s comment that President Barack Obama’s Affordable Care Act was “the craziest thing in the world.” She responded by listing the benefits that many people have seen from the law, including no more exclusions for preexisting conditions, the ability to keep adult children on a policy and the elimination of higher premium charges to women.

Trump gave few specifics of what a new health care law would look like, vowing that he’d replace Obamacare “with something absolutely much less expensive and something that works.” The one detail he cited would be allowing insurers to sell health care plans across state lines, which he said would create greater competition.