6 Teens Serve As Pallbearers For Navy Vet They Never Met

Six young men from Long Beach High School in Mississippi gave up a morning of their Christmas vacation to pay... 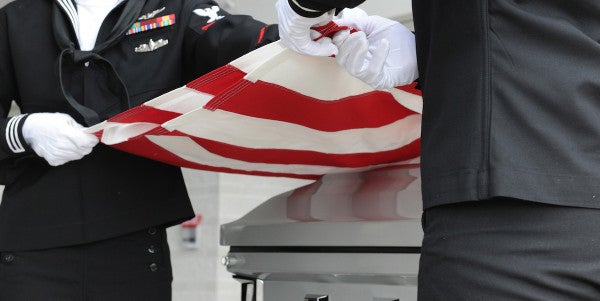 Six young men from Long Beach High School in Mississippi gave up a morning of their Christmas vacation to pay final respects to a man they didn’t know.

The teens, all upperclassmen, served as pallbearers for Jerry Wayne Pino, who died Dec. 12 at age 70.

He served his country in Vietnam and wanted to be buried at Biloxi National Cemetery. Pino pre-arranged his service, but something was missing. Pallbearers were needed.

“He was an unclaimed veteran,” said Cathy Warden, who works at Riemann Family Funeral Homes, which handled Pino’s services. “Eva Boomer, who also works at Riemann’s, is a veteran, too. She asked me, ‘Do you think we could get (Warden’s son) Bryce and some upperclassmen to come out?’ ”

Unfortunately, Bryce already had accepted an invitation out of town, which he nearly canceled to serve as one of Pino’s ballbearers. But he texted some classmates and within minutes, Boomer had six young men to serve as pallbearers.

Pino was a Navy veteran who lived on the Coast after Vietnam. The Baton Rouge man had joined the military in 1970 in New Orleans and left the service as a petty officer third class.

“Bryce sent the text and asked them to wear khaki pants, shirts and ties. ‘Let’s do this!’ he told his classmates. Almost immediately, they said yes,” Warden said.

One of the boys’ moms posted on Facebook about what the teens had done.

“This morning, JT and fellow Bearcats will be pall bearers at a veteran’s funeral service,” Stacie Tripp wrote. “Proud mom when he told me that no one should be buried without people who care present, especially a veteran.

“Exposure to patriotism and respect comes from the home, schools and community. Proud of all these boys!”

The Navy provided the honor guards, who folded the American flag that draped Pino’s casket and presented it to Jim Hudson, the funeral director for the service.

Hudson, in turn, gave the flag to the boys, four of whom are on the Long Beach football team. All six decided they would have it placed in the Bearcats’ locker room. Warden said she would have a case made with a plaque that bears Pino’s name to display the flag.

“It doesn’t cost anything to take some time to do something like this,” Warden said. “If our young people can figure this out, our country is going in the right direction.”