7,500 boots are on display at Fort Bragg to honor US service members killed since 9/11

The boots — which had the service members' photos and dates of death — were on display for Fort Bragg's Directorate of Family and Morale, Welfare and Recreation's annual Run, Honor and Remember 5k on May 18 and for the 82nd Airborne Division's run that kicked off All American Week 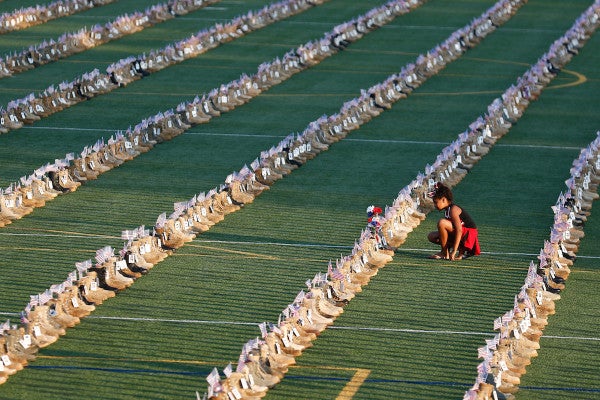 More than 7,500 boots on display at Fort Bragg this month served as a temporary memorial to service members from all branches who have died since 9/11.

The boots — which had the service members' photos and dates of death — were on display for Fort Bragg's Directorate of Family and Morale, Welfare and Recreation's annual Run, Honor and Remember 5k on May 18 and for the 82nd Airborne Division's run that kicked off All American Week.

The idea for the display came from similar ones at Fort Hood, Texas, and Fort Campbell, Kentucky. The first display at Fort Bragg was in Hedrick Stadium in 2014. It was organized by Fort Bragg's Survivor Outreach Services and Fisher House.

Jonathan Lomax, who was in the Marines for 21 years, was among those who stopped to see the boots and pay his respects on May 17.

Though Lomax knows of Marines who died in combat, he said he hoped he didn't recognize names on the boots as he strolled among the multiple rows on the field at Hedrick Stadium.

“Any loss of life is severe, so all of these are my brothers and sisters,'' Lomax said. “That's the way I look at it.”

He paused to reflect on what the boots symbolized.

“It means we've lost good soldiers, a lot of good service members fighting for this country,” he said. “And this is just recent. It's not even the ones we've lost before (9/11) — a lot of young people.”

This was the fourth year that Beth Grimshaw volunteered to help set up the display.

One of the boots represented Dr. Mark Taylor, a lieutenant colonel who Grimshaw worked with at Womack Army Medical Center. He was a surgeon assigned to the 82nd Airborne Division Forward Surgical Team.

Taylor was killed during a rocket attack on March 20, 2004, in Fallujah, Iraq.

“I've got some friends' husbands who are out here,” said Grimshaw, who paused to reflect on May 17. “I'd like to see this out so they're not forgotten.”

Heading into Memorial Day, Watson said the boots were on display to serve as a reflection of the sacrifices that all military branches have made.

“The true meaning of Memorial Day is not picnics and barbecues, though those are great things, the meaning is paying tribute,” she said.

WATCH NEXT: That Time The Air Force Dropped A Humvee On Fort Bragg