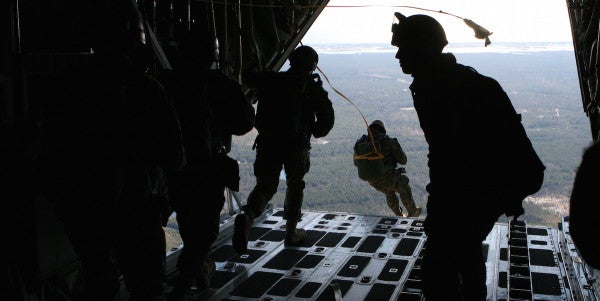 The aircraft, a transport plane assigned to Marine Aerial Refueler Transport Squadron (VMGR) 452, a New York-based Reserve unit, went down in LeFlore County, Miss., around 4 p.m. All 16 troops aboard, including 15 Marines and a Navy corpsman, were killed in the service's deadliest aviation accident in years.

Six of the Marines and the corpsman belonged to 2nd Marine Raider Battalion out of Camp Lejeune, North Carolina, MARSOC spokesman Maj. Nicholas Mannweiler told Military.com. The MARSOC troops had been en route to Marine Corps Air Station Yuma, Arizona, for a pre-deployment training exercise ahead of a future deployment to the Middle East, Mannweiler said.

The training exercise was to be conducted at the team level, which in MARSOC means small units of about 14 troops. Mannweiler said other members of this particular team, including the advance party, had already arrived in Yuma. The MARSOC Raiders aboard the KC-130 were bringing with them rifles and small-arms ammunition for the exercise.

While MARSOC regularly conducts a unit rehearsal exercise known as Raven in Mississippi, Mannweiler said this training exercise was unrelated. It's not immediately clear why the aircraft was passing over Mississippi en route to Arizona.

A small command with only a few thousand assigned troops, MARSOC does not have any native aircraft assigned to its units. Mannweiler said it's typical for the command to put troops aboard Reserve units' aircraft.

“We will partner with a variety of different partners,” he said. “It's not out of the ordinary for us to partner with any members of [Marine Forces Reserve].”

In a statement, MARSOC's chief of staff, who was not identified, expressed condolences to the families of the fallen.

“Our thoughts and prayers are with the entire MARSOC family at this time,” the chief of staff said. “The incredible demands of this dangerous and demanding calling forge some of the tightest unit and family bonds found in the U.S. military. This loss impacts us all.”

Mannweiler said MARSOC is still conducting next-of-kin notifications to the families of the fallen Raiders. Once those notifications are complete, the command will observe a 24-hour waiting period before publicly identifying the victims.

It's the second time in just two years that the MARSOC community has experienced a deadly aviation tragedy. In March 2015, a UH-60 Black Hawkcrashed during night training near Eglin Air Base, Florida, killing seven MARSOC raiders and four soldiers aboard. Within MARSOC, the fallen Marines became known with reverence as the Raider 7.

Marine Forces Reserve will publicly identify the other nine Marines who died in Monday's crash. They are believed to be air crew assigned to VMGR-452.