On Wednesday, Army Chief of Staff Gen. Raymond T. Odierno gave his final press conference as he prepares to step... 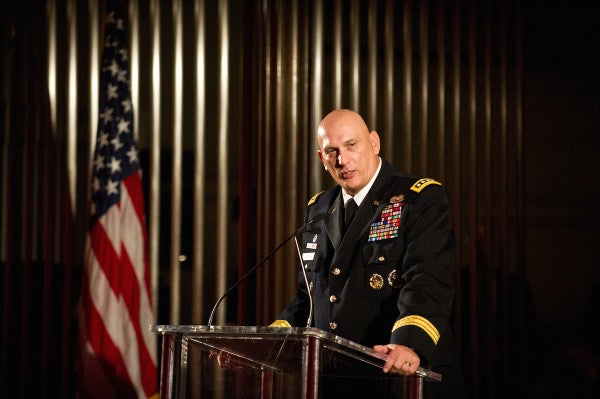 On Wednesday, Army Chief of Staff Gen. Raymond T. Odierno gave his final press conference as he prepares to step down from his position and retire after 39 years of service. During his tenure, Odierno faced budget challenges, troop reductions, the end of the war in Afghanistan and the rise of ISIS, as well as pressure to a modernize the Army.

Odierno has been exceptionally clear on the direction he believes the Army needs to go next, especially as his time in the service comes to an end. He has always been vocal about his support of our troops often going out of his way to create a dialogue with his soldiers.

Here are seven videos highlighting some of his more memorable moments.

1. The Colbert Show in Iraq

In June 2009, Stephen Colbert brought his political satire show to the troops in Iraq and Odierno, then commander of Multi-National Force-Iraq, was invited to speak about the security situation. Colbert asked specifically what it was that the American people hadn’t yet heard about the war in Iraq as the troops prepare to leave, and Odierno responded by giving the soldiers on the ground the credit they deserved.

Later in the video, Odierno shaved Colbert’s head, by order of the president.

On April 25, 2014, during a House Armed Services Committee hearing, Rep. Duncan Hunter of California’s 50th district suggested that Odierno needed assistance to improve the Army’s intelligence collection system. He stated how “excited” he was to work with the Army and the open market to integrate smart people from the private sector because the needs of his soldiers were not being met. Odierno did not take kindly to the suggestion that he was not meeting his responsibilities and took a moment to clear up the confusion.

“First off, I object to this. I’m tired of someone telling me I don’t care about our soldiers, and we don’t respond,” Odierno said. “Everybody on our staff cares about it, and they do all they can to help. So if you want to bring up an anecdotal incident let’s sit down, talk about it and we’ll give it a response.”

In a 2013 Senate Armed Services hearing, Odierno spoke passionately in support of maintaining the current budget of the Army. One primary reason being the protection of U.S. servicemen and women.

“We simply cannot take the readiness of our force for granted. If we do not have the resources to train and equip the force, our soldiers, our young men and women, are the ones who will pay the price, potentially with their lives.”

In 2013, David Letterman hosted Odierno on Veterans Day and asked him to speak on a variety of topics including his son’s service in the Army, the traditions of Veterans Day, and what civilians can do to support veterans on their return home from war. When asked about the war in Afghanistan, Odierno had this to say of our servicemen and women:

“What I’ve learned is, once you’ve been involved with war, you never want to have to do it again. You know, soldiers understand the chaos of war, and they understand what it means. But, I will tell you the brave young men and women of this country are incredible, and they inspire me every single day,” said Odierno.

In a 2013 interview on CBS, Odierno spoke candidly on the large budget cuts that hit the Army. After Odierno made a statement in February indicating the 2013 budget cuts could be the greatest threat to our national security, he was asked to give context on what he said.

“We’re supposed to build a 5-year plan for our budget, I can’t do that right now, because we keep going through continuing resolutions. We have no certainty in what our money is going to be. So we’re wasteful, we’re inefficient, and we could become more ineffective with our dollars. And I think people watch this, and wonders, what are we doing?”

In his final press conference as chief of staff on Wednesday, Odierno was specifically asked to comment on Republican frontrunner in the presidential race Donald Trump and his comments on military utility against the Islamic State. Odierno utilized his 39 years of experience to answer this question.

“The problem we’ve had is we’ve had outcomes, but they’ve been only short-term outcomes because we haven’t properly looked at the political and economic side of it,” he said of attempts to stop the Islamic State. “It has got to be three that come together. And if you don’t do that, it will not solve the problem, and that is what I continue to look at.”

When asked pointedly if he disagrees with Trump, Odierno responded, “I do, I do. Right now, I do.”

In the same interview, Odierno commented on the greatest threat that the United States faces today. Backing the words of many other military leaders, he named Russia as the primary threat.

“I believe Russia is the most dangerous because of a couple things. First they are more mature than some other of our potential adversaries,” Odierno stated. And I think they have some stated intents that concern me in terms of how the cold war ended. And so for me, I’m concerned. And they have shown some significant capability in Ukraine to do operations that are fairly sophisticated. And so for me, I think we should pay a lot of attention to that.”