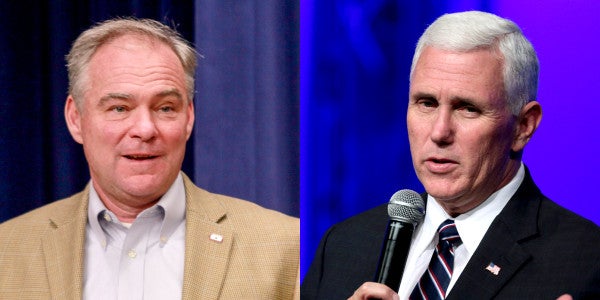 Here's are things you need to know before watching Tuesday's debate:

The debate is slated for 9 to 10 p.m. Eastern time, without commercial breaks. It is scheduled to be held Tuesday, Oct. 4, at Longwood University in Farmville, Virginia.

The moderator for the debate will be Elaine Quijano who is a CBS News correspondent and anchor for CBS' 24-hour online news network CBSN. She also anchors the Sunday CBS weekend news. She leads CBS's political coverage and has extensively covered the 2016 presidential election.

Quijano, of Filipino descent, is the first Asian-American to host a national presidential debate, as well as the youngest journalist to moderate a national debate since Judy Woodruff in 1988. She is also the first anchor from a digital news service to be offered a debate moderator role.

3. Where to watch and listen

The debate will broadcast live on major TV networks including ABC, CBS, Fox and NBC. It will also air on C-SPAN, CNN, Fox News, MSNBC, Telemundo and Univision.

Most broadcast and cable news networks, CBSN, YouTube and Facebook will be streaming the debate live. Twitter said they will show debate coverage and analysis from Bloomberg Politics, as well as stream the debate live here.

For radio listeners, NPR and local NPR affiliates will air the debate.

The debate will be divided into nine 10-minute segments. Quijano will start each segment with an opening question. Kaine and Pence will then each have two minutes to respond.

Leftover time in each segment will be used to go deeper into the discussion's topic.

The presidential debate commission said they would only invite candidates that averaged 15 percent in five national polls it selected. Johnson and Stein did not meet the requirements.

The topics for Pence and Kaine will not be released ahead of time — forcing both candidates to think quickly. It is expected that they will both use the questions to promote their presidential candidates.

7. Both candidates are preparing

Pence held mock debate sessions with Wisconsin Gov. Scott Walker as a stand-in, preparing for the debate, after Trump received criticism for being unprepared for the first presidential debate.

Kaine is preparing for the debates with the help of Washington, D.C. lawyer Robert Barnett, a veteran of prepping Democrats for debates.