A 70-year-old Home Depot employee was fired after attempting to stop shoplifters from making off with tools from a Pearland,... 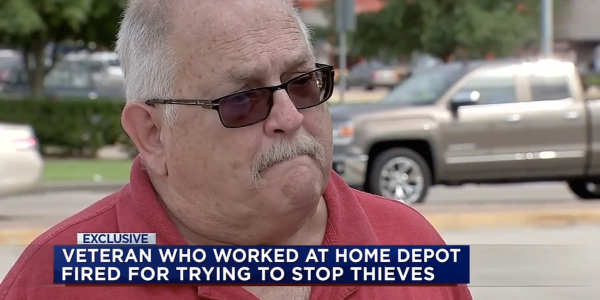 A 70-year-old Home Depot employee was fired after attempting to stop shoplifters from making off with tools from a Pearland, Texas store.

Jim Tinney jumped into action last month when he saw three men running out of the store carrying tool sets. The U.S. Army veteran threw a paint roller extension at one of the men's feet, KTRK-TV reported.

“In the Army, they train you to do things like that,” he said.

The men got away, and two weeks later Tinney was fired from the job. He acknowledged that he violated the company's policy that only permits trained security personnel to confront shoplifters.

“I think they could have written me up, reprimanded me. But terminate me? That's pretty strong,” Tinney told KTRK. “I'm 70 years old. I need to work. I needed that job. I enjoyed working with customers figuring out what they wanted to do. It's fun.”

“We've had deaths and serious injury over the years, and no amount of merchandise is more important than the safety of our associates and customers,” Holmes told the station. “Last week, we had an associate bitten. We've had stabbings, another associate with serious brain damage, and it goes on from there. In fact, in just the past 24 hours we've had two shoplifters pull guns at two different stores at both ends of the country.”