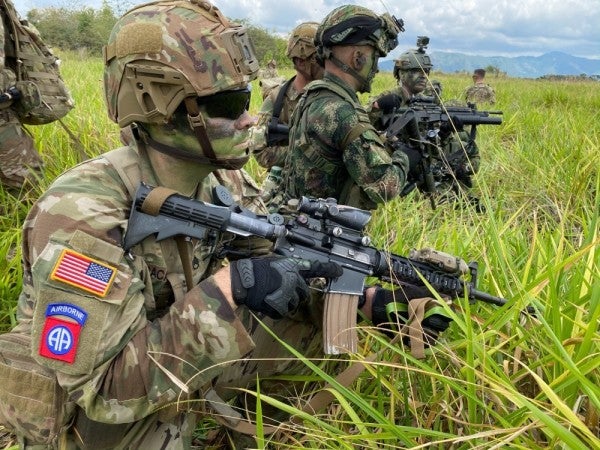 About 75 paratroopers from the US Army's 82nd Airborne Division and 40 personnel from US Army South spent the final days of January in Colombia, working with Colombian troops for an airborne assault exercise.

The exercise, which took place between January 23 and January 29, saw US and Colombian troops conduct airborne insertion from US and Colombian C-130 Hercules aircraft and then carry out exercises simulating the capture of an airfield.

A video recorded by one paratrooper during a static-line jump allows you to go along for the ride.

The exercise allowed US and Colombian personnel to work together and exchange strategic and tactical expertise, US Southern Command, which oversees military operations in the region, said in a release announcing the exercise.

You can see some of what they got up to in the photos below.

Colombia is one of the US's closest partners in the region, and the two countries' militaries have worked together closely for decades. The US has also provided billions in aid to Colombia under Plan Colombia and, later, the so-called Peace Colombia.

“We are honored to train with Colombia — a close friend of the US and Global Partner to NATO,” US Navy Adm. Craig Faller, head of Southern Command, said in the release. “This airborne exercise demonstrates the interoperability, lethality and professionalism of our militaries.”

The US has increased pressure on Venezuelan President Nicolas Maduro's government, while Colombia has been grappling with the brunt of the millions of Venezuelans who've fled their country due to political violence, widespread shortages, and eroding law and order.

Faller has underscored the importance of partnerships for improving security in the region.

At a press briefing in Florida on January 23, Faller pointed to Venezuela as a “safe haven” and “base of opportunity” for dissident members of the demobilized FARC rebel group, as well as guerrillas from the ELN rebel group and “terrorists groups” involved in narco-trafficking.

“The best way to deter or defeat any of these threats is with these partnerships,” Faller said. “Their capacity and ours helps both secure the US and partners.”