The 82nd Airborne soldiers will take over security at the embassy in Baghdad from the Special Purpose Marine Air-Ground Task Force Crisis Response, a U.S. Central Command spokesman said 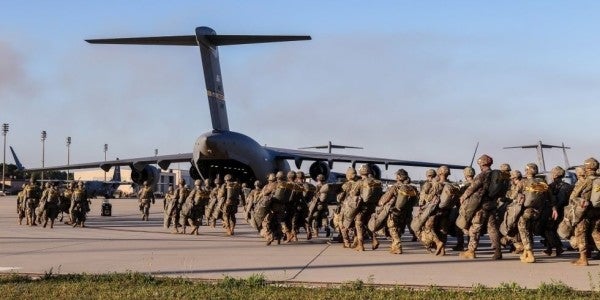 The 82nd soldiers will take over security at the embassy in Baghdad from the Special Purpose Marine Air-Ground Task Force Crisis Response, a U.S. Central Command spokesman said. An element from the division's Immediate Response Force brigade will be assigned to the embassy, according to a statement released Tuesday by the spokesman.

The statement did not give details of when the paratroopers will go to the embassy or how many of them will go.

“For operational security reasons, we do not discuss specifics on force disposition, future operations, or deployments,” the spokesman said.

The 82nd soldiers deployed to Central Command's area of operations Jan. 1-4, according to the statement. Previous reports indicated that they were going to Kuwait.

The deployment occurred “in response to increased threat levels against U.S. personnel and facilities, including defensive support to the embassy in Baghdad,” the statement said.

The paratroopers are from the 82nd's 1st Brigade Combat Team. About 650 left on Jan. 1, with about 2,850 following over the next several days.

The soldiers were sent to the Middle East after attacks on the embassy by protesters. Those attacks followed an airstrike in Baghdad ordered by President Donald Trump that killed a top Iranian general.

Iran responded to the airstrike by firing more than a dozen rockets at two bases in Iraq where U.S. troops were based. Initial reports indicated no U.S. troops were hurt, but 11 were later flown to medical centers for evaluation after they had concussion-like symptoms.