“My guys put everything that they had out there and they pulled me off target and kept me safe." 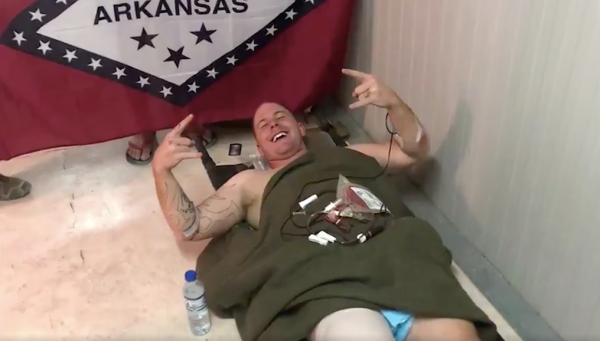 The Purple Heart is the nation’s oldest military award given to those wounded or killed while serving in American armed forces.

Today is #PurpleHeartDay, a day to honor those who are wounded or make the ultimate sacrifice on the battlefield. Sgt. David Scudder was wounded in action while serving with @PantherBrigade. Watch the video below to learn more about his story. pic.twitter.com/Bl0UT9Pmoi

Scudder’s battalion, the 2nd Battalion, 505th Parachute Infantry Regiment, was on a mission in the Farah Province to retake a district center that the Taliban took control of during election season.

After the soldiers' Chinooks landed, the soldiers were immediately ambushed with rocket-propelled grenades and machine-gun fire, Scudder said.

Spc. Dominic Green, who was also on the mission, estimated that the first round threw the soldiers about 5 feet to the ground. Spc. Joseph Sturgill remembered hearing a medic come over the radio with the battle roster number of a U.S. casualty —Scudder.

“And immediately, just the worst-case scenario was going through my head,” Sturgill said.

Green and Sturgill were among those who put Scudder on a stretcher and moved him for about 2 miles. The soldiers were attacked a second time, with Green providing suppressive fire to allow Sturgill and the others to pick Scudder up again and move him to the helicopter landing zone.

Related: 'We’re going to war, bro' — preparing for battle with the 82nd Airborne

Sturgill described it as letting adrenaline and training kick in. Green said it’s a moment that impacted him and one that he’ll remember.

“It’s not just like we’re all soldiers doing something,” he said. “It’s more of like a brotherhood-type thing.”

And when Scudder’s battalion leadership presented him with the medal last week, Green and Sturgill were by his side.

“My guys put everything that they had out there and they pulled me off target and kept me safe,” Scudder said.

A spokeswoman for the 3rd Brigade Combat Team, which redeployed back to Fort Bragg this spring, said Scudder was one of five paratroopers who was first approved for the medal.

Others are expected to receive their Purple Heart next week, said Maj. Deidra Johnson, the brigade’s spokeswoman.