At least once a week for the past nine months, Nichole Gallagher and her daughters, Annalynn and Haley, counted the... 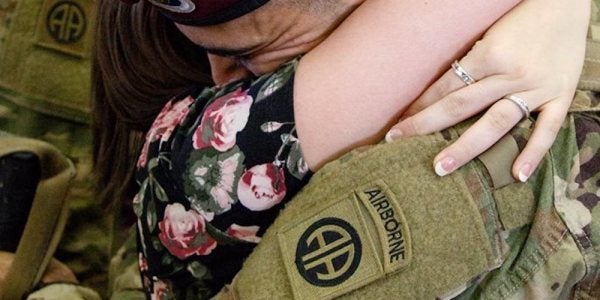 At least once a week for the past nine months, Nichole Gallagher and her daughters, Annalynn and Haley, counted the days remaining before their husband, father and best friend came home.

They started at more than 260 days. And then, sometimes painstakingly slow, the number shrank and shank.

On Sept. 20, the countdown reached zero as Staff Sgt. Jacob Gallagher and more than 300 other paratroopers assigned to the 2nd Brigade Combat Team, 82nd Airborne Division returned to Fort Bragg after a nine-month deployment.

The soldiers are among the approximately 2,100 paratroopers from the brigade who have been serving at more than 20 locations in Iraq, Syria and Kuwait for most of the past year while supporting the war against the Islamic State.

Gallagher, who marched into a passenger shed at Fort Bragg’s Green Ramp while carrying his unit colors, stood holding the flag as he reunited with his family.

His two daughters, ages 4 and 2, swarmed about him, pressing their faces against his and holding their own tiny American flags.

“It’s fantastic,” Gallagher said. “It’s great to be back.”

Nichole Gallagher said the family had been anxiously awaiting for this day.

The girls were excited, she said. And so was she.

“I am ecstatic,” Nichole Gallagher said. “He’s my best friend, and he’s been missing too long.”

“I’d wait for you forever but 9 months is long enough,” one read.

The 2nd Brigade officially ended its mission on Saturday. But hundreds of soldiers remain overseas, set to return in the coming days.

Col. J. Patrick Work, the brigade commander, led the latest group of paratroopers home. He said he couldn’t be more proud of the work the soldiers accomplished during their tour of duty.

“We helped the Iraqi security forces by providing advise and assistance,” Work said. “The advise was about helping them think through the problems that confronted them, namely how to overmatch ISIS with their finite resources. And the assistance is largely about sharing information, sharing intelligence and then providing precision lethal fires to kill ISIS so the Iraqis could continue to attack.”

While deployed, the soldiers helped Iraqi forces liberate the city of Mosul, a major metropolitan area that had been the largest city under ISIS control, and Tal Afar, another key city in northern Iraq.

Work, who had deployed to Iraq or Afghanistan 10 times before the latest mission, said the advise and assist mission was unlike anything he had done before.

“This is warfare by, with and through a partner,” he said. “And that’s challenging because you really sacrifice a degree of control. It takes a degree of empathy, humility and patience where you are really putting the Iraqi security forces first every day of the week.”

Before leaving the Middle East, the brigade turned over its advise and assist mission to the 3rd Brigade Combat Team, 10th Mountain Division, based out of Fort Polk, Louisiana.

Work said the effort was in good hands.

“There’s a mighty coalition that’s come together and is decimating the army of ISIS,” he said. “This army is circling the drain right now and there’s continued pressure on the army as Iraqi security forces and our Syrian partners continue to attack.”

As hundreds of families celebrated at Fort Bragg, Work paused to note the sacrifices of the three paratroopers who were killed during the tour.

First Lt. Weston C. Lee, 25, of Bluffton, Georgia, was killed by the blast from an improvised explosive device in Mosul on April 29.

“All three of those paratroopers epitomize everything that is exactly right about an all-volunteer force during a time of war,” Work said. “Our most sincere condolences go out to the Stiglers, the Brooks family and the Lees.”

The colonel said the three paratroopers and their families made an immense sacrifice and it would not be forgotten. He said the soldiers’ families would forever be part of the brigade family.

“They’ve literally given their families to us, entrusted us with their young people, their children,” Work said.

And the soldiers would forever have a legacy in the brigade, too.