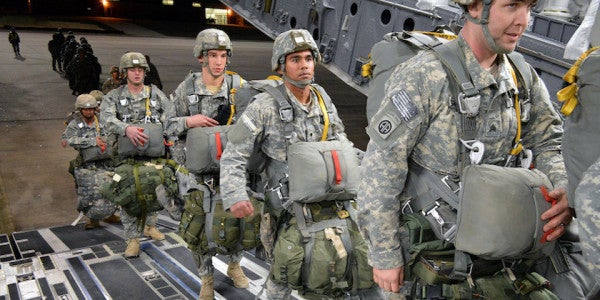 The U.S. Army announced Thursday it will deploy 1,700 soldiers from the 82nd Airborne Division this winter to advise and assist Iraqi Security Forces currently trying to retake Mosul from Islamic State fighters.

The 82nd Airborne's 2nd Brigade Combat Team, stationed at Fort Bragg, North Carolina, will deploy to the U.S. Central Command area of responsibility to take part in Operation Inherent Resolve, according to an Army press release.

The unit will replace the 2nd Brigade Combat Team, 101st Airborne Division, in training, advising and assisting the Iraqi forces.

“Readiness is our top priority; our paratroopers are prepared for this deployment in support of Operation Inherent Resolve. Our team looks forward to this important mission and our opportunity to assist our Iraqi partners.”

In mid-October, the Army announced it will deploy about 500 soldiers from the Big Red One to Iraq this fall.

Related: 12 Reasons Why Paratroopers Do It Better »

Meanwhile, about 100 U.S. advisers, mostly Special Forces, and forward air controllers are moving with Iraqi forces, backed by U.S. airstrikes and rocket artillery fire, in the ground offensive to drive the Islamic State of Iraq and Syria from Mosul.

Army engineers have also pushed closer to the city, searching for improvised bombs just west of the Great Zab River, about halfway between the Kurdish city of Irbil and Mosul.

The troops, wearing 101st Airborne Division patches, said they weren't allowed to talk to the media, Stars and Stripes reported. When a loud explosion rocked a nearby village, soldiers who had been scouting a roadside compound ran back to their armored vehicles.