Since joining the military in 2005, Master Sgt. Michael Mabry has jumped out of military aircraft more than a hundred times. Yet a jump in January is what the 45-year-old describes as the highlight of his military career. That's when he saw his son, 18-year-old Pvt. William Mabry, participate in his sixth jump and his first under the 82nd Airborne Division 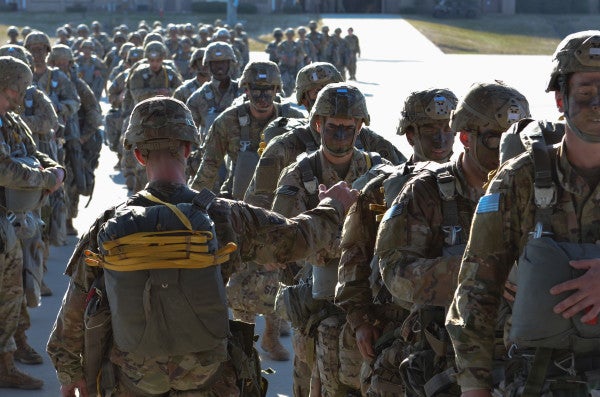 Since joining the military in 2005, Master Sgt. Michael Mabry has jumped out of military aircraft more than a hundred times.

Yet a jump in January is what the 45-year-old describes as the highlight of his military career. That's when he saw his son, 18-year-old Pvt. William Mabry, participate in his sixth jump and his first under the 82nd Airborne Division.

“It's really an honor to be able to serve in the same division as my son as paratroopers,” Michael Mabry said. “There's a long lineage of heritage and honor within the 82nd of the American paratrooper, and to be able to pass that on is quite special.”

Michael Mabry was living in his hometown of Chattanooga, Tennessee, working as a martial arts instructor when the Sept. 11, 2001, terrorist attacks on American soil happened.

His son was barely a year old.

“I sold my house, sold my business and joined the military,” Michael Mabry said.

After completing basic training at Fort Jackson, South Carolina, his first duty station was at Fort Bragg, where he's remained most of his career.

Michael Mabry was assigned to the 2nd Battalion, 319th Field Artillery Regiment and deployed to Iraq in 2006, to Afghanistan in 2010 and to Iraq again in 2017.

As part of the field artillery, he would participate in heavy drops with a howitzer and jump in to engage the weapon.

For William Mabry, growing up around the military has “been the way of life since the beginning,” he said.

After graduating from Overhills High School in Spring Lake last year, William Mabry knew he wanted to jump out of planes.

“Growing up, he'd always be at home talking about airborne operations,” the younger Mabry said of his father.

“You just go out and your training takes over and you do the procedures that you've been taught, and then the next thing you know you're 800 feet off the ground under a parachute watching the ground come towards you,” Michael Mabry said. “There's nothing like it to be a paratrooper and to jump out of aircraft with 100 people around you.”

William Mabry left for basic training on July 23 and graduated on Oct. 4 at Fort Jackson, where he was named Soldier of the Cycle. He graduated from Advanced Individual Training at Fort Sill, Oklahoma, as a distinguished honor graduate.

He remembers the loud sounds of the military plane during his first jump on Dec. 3.

“You're anxious and your anxiety is pumping. Your adrenaline is going. I was No. 1 in the door. I'm standing there and they had the door open and my eyes get all wide and then they tap my leg and I go,” William Mabry said. “There's just no other feeling like it.''

He arrived at Fort Bragg shortly after graduating from airborne school in December.

Knowing that he wanted to be a paratrooper, William Mabry knew that he would be assigned to the same duty station as his father.

“I see him every once in awhile, but we just keep it professional,” William Mabry said.

The two were able to share a professional and personal moment on Jan. 7, when William Mabry made his sixth jump and his first with the 82nd Airborne Division.

His father conducted his jumpmaster personnel inspection to ensure he was properly rigged up to the parachute harness and that all of his equipment was safe.

Both boarded a C-17 Globemaster III aircraft, and the two jumped into Sicily Drop Zone. For Michael Mabry, who exited the plane right after his son, it was his 116th jump.

“That was the most memorable experience of my Army career to get to share that with my son. I'll never forget it,” Michael Mabry said.

“Him coming out right behind me, explaining (things and) watching me go out the plane, was a pretty humbling experience,” William Mabry said.

Michael Mabry immediately sent a text message to his wife, Michelle, after the jump to let her know they both landed OK.

“I couldn't be more proud of my two favorite men in life. I never dreamed that 16 years ago my son would be in the 82nd serving alongside his dad,” Michelle Mabry said of having her husband and son in the military at the same time.

Although both Mabrys serve under the 82nd Airborne Division, they are assigned to different units.

“I know everybody over there, but I try to keep my distance from his battery so there's no undue influence,” Michael Mabry said.

Michael Mabry is the noncommissioned officer in charge at the division's air office, which coordinates Air Force aircraft for the 82nd Airborne Division's operations.

When his son told him he wanted to join the military, William Mabry said he'd be there to help if his son needed it.

“I want to be his dad first, not his (noncommissioned officer), but I can help give him guidance on how to be successful,” William Mabry said.