The USS Wolverine is one of the oddest aircraft carriers in US Navy history. Built in 1912, the Wolverine was... 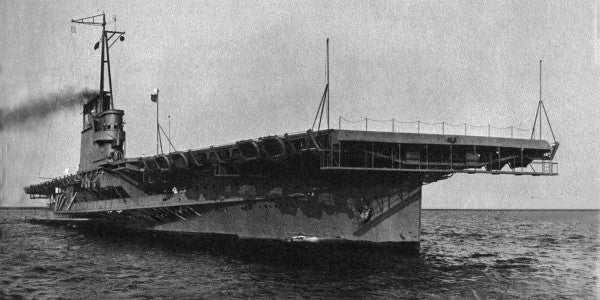 The USS Wolverine is one of the oddest aircraft carriers in US Navy history.

Built in 1912, the Wolverine was originally a side-wheel steamer called the SS Seeandbee that was used for luxury cruises on the Great Lakes. But it got a second career when it was bought by the US Navy in 1942 as the service rapidly stood up a carrier force to answer Japanese aggression.

By January 1943, the Wolverine had been converted into an aircraft carrier to train naval aviators and flight deck crews for World War II.

It was based in Navy Pier in Chicago so that it could operate in Lake Michigan, but it lacked many features that combat carriers have, such as elevators and hangar decks.

Check it out below:

Maritime History of the Great Lakes

The president of the company that owned the SS Seeandbee, Thomas J. McGuire, reportedly even overcharged the US by $500,000 for the ship. He was later fined only $5,000 for the fraudulent price.

To convert the ship into a carrier, the US stripped off the large wooden superstructure and exhausts.

And built a flight deck in its place.

The USS Wolverine was commissioned in August 1942. It landed its first aircraft in September 1942.

USS Wolverine as she completes her fitting out in the summer of 1943.US Navy

It had a 550-foot flight deck, about a long as modern-day guided missile cruiser.

Twelve coal-fired Scotch boilers propelled its two side-wheels to a top speed of less than 23 mph.