Moscow announced on Wednesday that it had deployed an unknown number of its MiG-29SMTs to Syria for the first time. Russian defense... 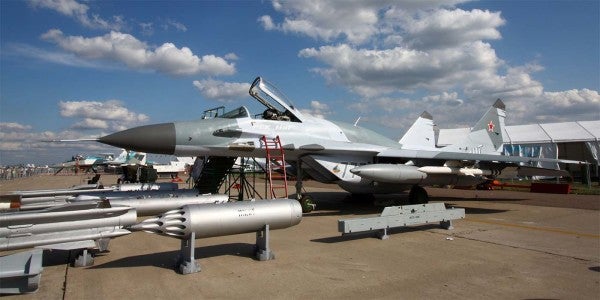 Moscow announced on Wednesday that it had deployed an unknown number of its MiG-29SMTs to Syria for the first time.

Russian defense firm Mikoyan started developing the MiG-29, codenamed “Fulcrum” by NATO, in 1974, and the jet made its maiden flight in 1977.

It was meant to be stationed near front-line areas to cover Soviet army units and also to protect other aircraft from F-15s and F-16s.

The MiG-29SMT is one of Russia's most recent upgrades of the Fulcrum, and you can see more of it below.

It has six external ordnance stations and carries a variety of air-to-air missiles.

It can carry air-to-surface missiles. too.

It can hold two Kh-29T or Kh-29L air-to-surface missiles, up to four Kh-25M missiles, or two Kh-31A anti-ship missiles and two Kh-31P anti-radar missiles. It can also hold up to four KAB-500 guided bombs.

The first pictures of the MiG-29SMT in Syria showed one of the Fulcrums carrying two KAB-500 bombs.

While Russian state-owned media often touts the number of ISIS fighters it has killed in Syria, especially in the last month, it rarely, if ever, reports the number of civilian casualties.

On Tuesday, the Syrian Observatory for Human Rights reported that Russian airstrikes in the Deir Ezzor region had killed 76 civilians, including 30 women and children, over the previous 72 hours.

It's capable of reaching speeds of 932 mph near the ground and 1,491 mph at high altitudes. It can also reach altitudes of more than 57,000 feet.

Russia currently has about 60 MiG-29SMTs.