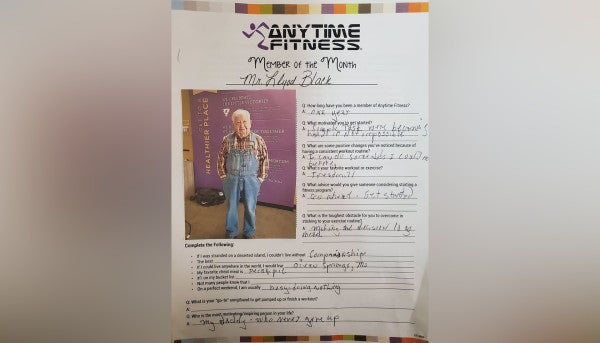 When Ashley Seaman, the general manager of Anytime Fitness in Semmes, chooses a Member of the Month to feature on the fitness center's Facebook page, she looks for “someone who is showing a lot of progress and dedication,” she says. Lloyd Black – who, at 91 years old, is the gym's oldest member – was an obvious choice for the first month of the new decade.

She knew he'd be an inspiration to others, but she didn't predict how people would react to seeing a photo of the white-haired, sweet-faced fellow posing for a photo in his usual workout attire: denim overalls. Her post has been shared some 2,500 times, with hundreds of comments from those who recognize the former principal who retired 30 years ago from Mary G. Montgomery High School.

Lloyd and his wife, Mary, joined Anytime Fitness about a year ago. “I realized I was in bad shape,” he says. “I could not do simple tasks anymore. That's what motivated me to do it.”

When he started, he could only spend about 10 minutes walking on the treadmill. Over the past year, he has gradually increased to 30 minutes. He also does leg presses and works out on some of the upper-body machines. As a result, his strength and balance are better, and he says he can walk farther and more confidently.

“It just improves the way you feel,” he says.

He's lucky to have good genes. His mother lived to be 101, his older sister died when she was 95, and his younger sister passed away at 94.

He says he thanks God every morning to have been born into such a happy family. He grew up in Ackerman, Miss., 50 miles west of Columbus. His father was a masterful practical joker – in fact, Lloyd has written down his memories of all his dad's funny stories. And the apple doesn't fall far from the tree.

Lloyd joined the U.S. Air Force the day after he graduated from high school and was stationed in Hawaii. Later, he graduated from Mississippi State University and decided he wanted to teach school in Mobile, where his brother-in-law was stationed at Brookley Field. A lover of history, he taught world history for seven years at Vigor High School before becoming an administrator there and at several other Mobile schools.

“If I had my life to do over again, I wouldn't change a thing,” he says.

He served as assistant principal at Vigor, then as principal at Baker for two years, B.C. Rain for four years, Davidson for four years and Montgomery for 13 years. In the comments under his photo in the Member of the Month post, one former student remembered him as “a sweet, kind man even when you were in trouble.”

He still has kind eyes that twinkle when he's making a joke, and an impish smile that's contagious. “I've been a blessed person,” he says. “I'm in good health. I thank the Lord for that. I still think humor in life is good.”

Lloyd was married to his first wife for 48 years. When she died, he was devastated. But he found love again in Mary, and they've been married for the past 10 years.

The Blacks' home sits on seven wooded acres, where he still cuts his own grass and does the weed-eating. He dabbled in photography until digital replaced film. At one time he had a greenhouse; he has kept a garden; and he enjoys doing woodworking. “I run through one hobby after another,” he says.

He drives himself to the gym, just a few minutes away from his house, every other day. And he really does wear those overalls to work out, for a practical reason. “I don't have any hips, and I can't keep my pants up!” He busts out laughing.

“I believe in enjoying life,” he says. “You can make what you want to out of it.”

Ashley says she always hopes the Member of the Month post will inspire others, as Lloyd Black has done. “I want people to think, 'If he can do it, why can't we?'” she says. “Fitness isn't about age. It's about healthy living.”