Perry Cormen cracked the standard paratrooper joke. “Why would anyone jump out of a perfectly good plane?” And then he... 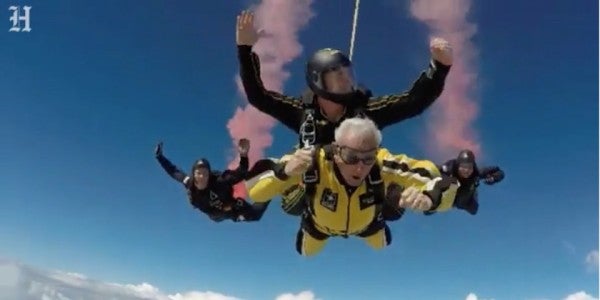 “Why would anyone jump out of a perfectly good plane?”

And then he did it.

Cormen, a 91-year-old World War II veteran, was tethered to his guide back to earth, Sgt. First Class Johnny Hackett, as they made the leap from 13,500 feet and reached a freefall speed of 120 mph.

“Each time is like the first time,” Cormen said. “The rush never goes away.”

Hackett, who was making his 2,467th jump, is a member of the elite U.S. Army unit known as the Golden Knights, so accompanying Cormen down to the orange target X on a Homestead Air Reserve Base field was like a day at the office — except that his office is at very high altitudes.

“To jump with Mr. Cormen was quite an honor,” said Hackett, 34. “My grandfather served in World War II. These men laid the foundation for our armed forces.

“And Mr. Cormen was really stoked.”

The tandem jumping exhibition Thursday brought back memories for two other veterans. Al Mampre, 94, a paratrooper and medic who was an original member of the “Band of Brothers,” served in the Netherlands, Belgium and Germany.

“You are detached from the world up there and it’s an exhilarating feeling — until another paratrooper lands right on top of you, which happened to me in Holland,” he said.

Melvin Morris served as a Green Beret during two tours of Vietnam from 1969 to 1971. Those jumps were usually from 800 feet, carrying 150 pounds of equipment and landing in trees in the middle of the jungle.

“I dreamed of being a paratrooper,” said Morris, 75, who became a master parachutist. “There’s the intrigue, the masculine look, the appeal to the girls.”

Morris was wearing the sky-blue-beribboned Medal of Honor he was awarded for his bravery in combat in the Mekong Delta, when he recovered his team sergeant’s body and helped medivac two other comrades out of harm’s way while under heavy fire. He was shot three times yet managed to elude the enemy.

“I did what I had to do through sheer will,” he said. “The Green Berets do not leave their brothers behind for any reason.”

The decorated veterans, who were nearly as spry as the athletic Golden Knights, were in Homestead to make a pitch: The U.S. Army wants you. They’d like to see more young people enlist.

“We were part of a generation that was gung-ho about serving our country,” said Cormen, a B-29 bomber pilot. “And I learned how to fly airplanes.”

The National Defense Authorization Act signed by outgoing former President Barack Obama halted the scheduled drawdown of the regular Army and requires an expansion from 460,000 to 476,000 by September, which is “a challenging mission,” said Major General Jeffrey J. Snow, commanding general of recruitment.

“We’ve had an all-volunteer army since 1973 and some say we cannot sustain it but I disagree,” Snow said. “I want our Golden Knights and veterans to tell their stories and inspire young men and women to consider the Army as a career.”

The Army, which offers 150 training specialties, is the toughest of the four services to join because only about one third of applicants meet qualification standards. Some can’t pass the physical test and some can’t pass the cognitive test.

“Obesity is one of the biggest impediments,” Snow said. “A lot of young people have a high school diploma but can’t get the score they need on our screening exam. We also look at character. It has to be a good fit. For example, I will take someone who has smoked marijuana as long as he or she is compatible with our expectations.”

Snow has 9,000 recruiters nationwide ready to dispel misperceptions and explain the vocational and academic benefits — not to mention the parachuting thrills — of joining up.