BRRT With Surround Sound: The A-10 May Get A New 3D Audio System

Editor’s Note: This article by Oriana Pawlyk originally appeared on Military.com, a leading source of news for the military and veteran community. The U.S. Air... 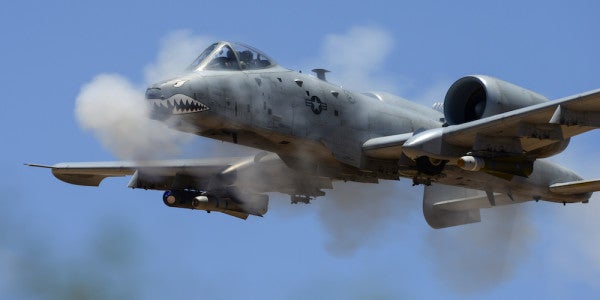 The U.S. Air Force may soon finalize how many surround-sound audio systems it will retrofit into the A-10 Thunderbolt II attack aircraft as part of an effort to give Warthog pilots more situational awareness.

Earlier this month, the Air Force quietly issued an update to an earlier request for information, saying it plans to award Terma North America Inc., a defense aerospace company, a sole-source contract to integrate a commercial off-the-shelf three-dimensional audio system “to drastically improve the spatial, battlespace, and situational awareness of the A-10C pilots,” according to the solicitation on the government contracting website FedBizOpps. The RFI was originally issued last December. Janes first reported on the new update, which was also cited by the War Zone.

According to Terma, the 3D audio works as a self-protection system. Pilots have multiple audio signals coming at them, making it difficult to discern certain radio calls or even warnings. Terma's system breaks that apart into a surround-sound effect to better hear dueling signals.

The 3D audio has been used in the Danish F-16 Fighting Falcon Missile Warner System upgrade, according to the company.

While the Air Force has not set a date for giving Terma an Indefinite Quantity/Indefinite Delivery (IDIQ) contract, nor disclosed how many systems it plans to buy, the latest announcement shows the service is willing to invest in capabilities that may make the A-10 more survivable in a high-threat environment.

The A-10 doesn't have a stealth coating like its F-22 Raptor and F-35 Joint Strike Fighter cousins, but the close-air support mission aircraft carries a variety of rockets, missiles and bombs fastened to hardpoints under its wings. It most notably employs its GAU-8/A 30mm gun system, which produces an iconic sound that ground troops never forget.

But increasingly non-permissive environments have concerned Defense Department officials in recent years, and leaders have begun asking what types of aircraft could survive in conflicts with neer-pear competitors such as Russia and China.

In January, the Air Force said it had begun searching for a new company to rebuild wings on the A-10 after ending an arrangement with Boeing Co.

The following month, it released a request draft for proposal for companies to start working on their propositions to re-wing the 109 remaining aircraft in the inventory needing upgrades.

Air Force officials have said the service can commit to maintaining wings for six of its nine A-10 combat squadrons through roughly 2030.

It has yet to commit to re-winging all 281 A-10s currently in its inventory.