The Air Force is set to acquire new wings for its A-10 Thunderbolts in order to keep the vaunted attack... 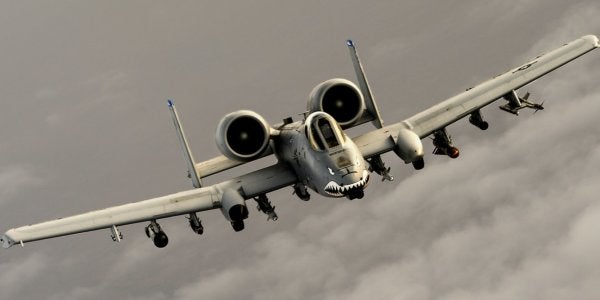 The Air Force is set to acquire new wings for its A-10 Thunderbolts in order to keep the vaunted attack aircraft in operation until the 2030s.

The Air Force told Congress last year that 110 of its 283 A-10s were at risk of being permanently grounded unless money was apportioned to restart production and rewing the remaining planes.

The service has already paid to replace the wings on 173 of its A-10s, but Boeing, which originally built the wings, has since shut down production, and the Air Force didn't have funding for new wings for the remainder — 40 of which would have to be grounded by 2021, according to CNN. Those aircraft are still flying with wings from the late 1970s, according to Aviation Week.

The $1.3 trillion omnibus spending bill signed by President Donald Trump this month included $103 million requested by the Air Force to fund the rewinging. That is enough to cover the production of four new sets of wings, but going forward, Boeing might not be supplying them.

“If the omnibus comes out in the way that we expect it to, will restart the line for the rewinging and will include enough money for about four more rewings on top of the 170-plus that are already rewinged,” Air Force Secretary Heather Wilson told the House Armed Services Committee on March 20. “The FY19 budget request includes $80 million for additional rewingings of the A-10. We'll go out for a bid, but we think that will get us between eight and 12 more in FY19.”

The program is considered a “new start,” and under it, the new wings will come with a higher price, as engineers work through the hiccups of the design phase.

Air Force Gen. Mike Holmes, head of Air Combat Command, mentioned that the service was looking for a new partner on the A-10 earlier this year.

“The previous contract that we had was with Boeing, and it kind of came to the end of its life for cost and for other reasons,” he said in January. “It was a contract that was no longer cost-effective for Boeing to produce wings under, and there were options there that we weren't sure where we were going to go, and so now we're working through the process of getting another contract.”

Because of the potential for A-10s to be grounded if they don't get new wings, “acquisition is being expedited to the maximum extent possible,” according to a draft request for proposal for A-10 wings, issued in February.

According to the anticipated schedule included in the draft request, a final request is expected by April 3, a proposal due date on June 5, and the awarding of the contract by the end of the March 2019. (The 2019 fiscal year runs from October 2018 to September 2019.)

The service has committed to maintaining six of the nine A-10 squadrons it has, but the contract will ultimately determine how many wings the service can actually buy, an Air Force spokeswoman told Aviation Week, saying “the majority of the A-10 fleet will fly and fight for the foreseeable future.”

The hard-fighting A-10 emerged last year from a debate between lawmakers and the Air Force over whether it would stay in service, and in recent years it has seen duty all over the world.

It was a workhorse in Operation Inherent Resolve against ISIS in Iraq and Syria, releasing 13,856 weapons between August 8, 2014 and mid-2016 — second only to the F-15E Strike Eagle, which released 14,995 weapons over the same period.

The Thunderbolt has also seen duty in Afghanistan, where the government requested the A-10 return in late 2017. A squadron of 12 A-10s arrived in the country in January, where it has taken part in an intensified air campaign against militants in the country — in particular, the Taliban and its drug-producing facilities.

The venerable aircraft will soon face competition closer to home, however, with comparison testing between it and the F-35— the plane originally meant to replace the A-10 — happening as soon as this summer, when the F-35 is scheduled for testing in close-air-support and reconnaissance operations.

Congress has said that the Air Force cannot shed any A-10s until that evaluation takes place. But whatever the results, the Thunderbolt looks likely to have vocal supporters.

“If I were to sit down to design a heavy attack platform, it would look just like the A-10,” Air Force Lt. Col. Bryan France told The Aviationist. “Our airframe was built to extend loiter times over the battlefield, deliver a substantial amount of ordnance, and survive significant battle damage. It does these things exceptionally well.”

“It is built to withstand more damage than any other frame that I know of. It's known for its ruggedness,” A-10 pilot Lt. Col. Ryan Haden told Scout Warrior. “It's deliberate, measured, hefty, impactful, calculated, and sound. There's nothing flimsy or fragile about the way it is constructed or about the way that it flies.”

“I happen to be a fan of the A-10,” Wilson, the Air Force secretary, told lawmakers in December.