The depleted uranium slug is so dense, it turns tank armor into white-hot shrapnel in the crew compartment. 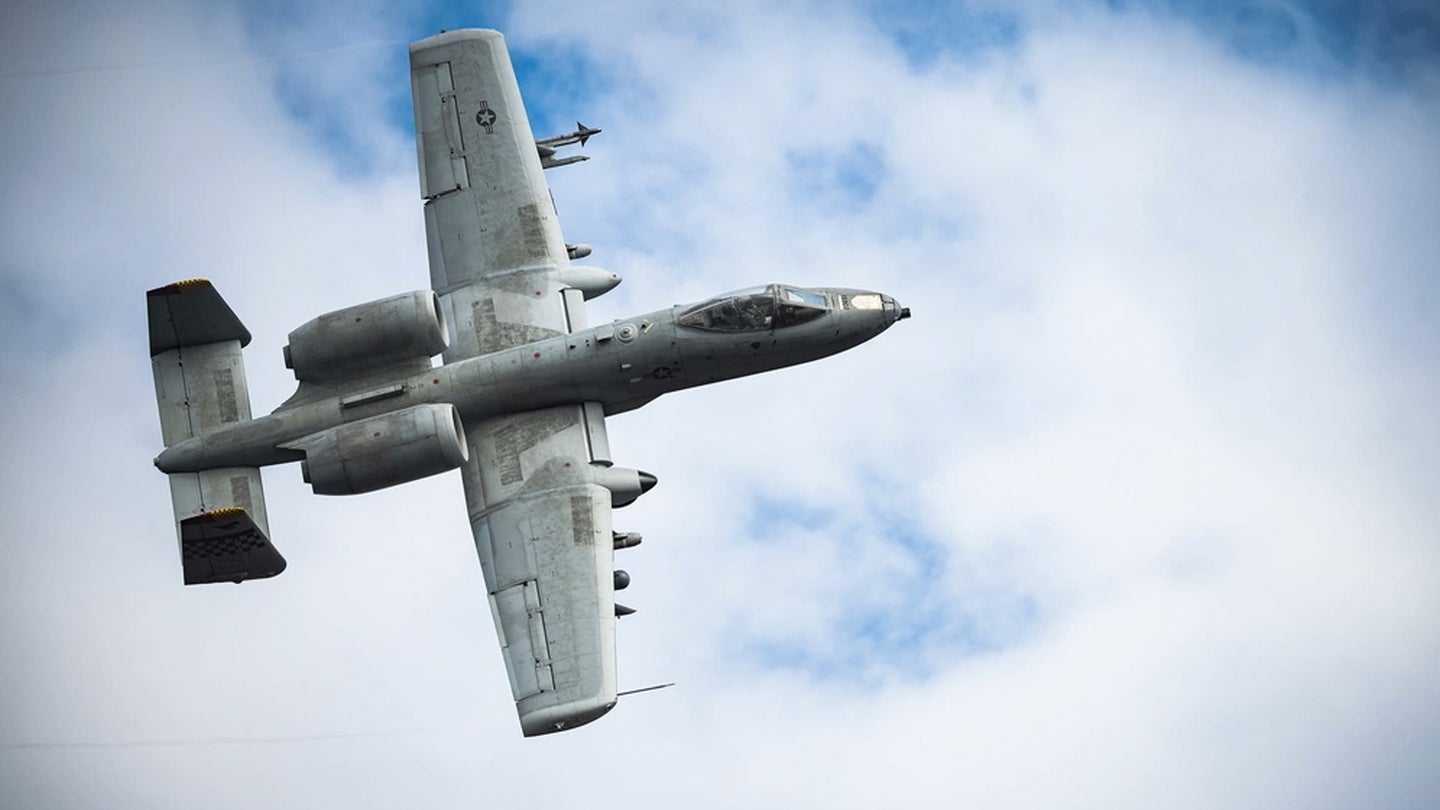 Military tanks have a reputation for being big, heavy, and nearly unstoppable. But a new video breaks down yet another reason why, if you’re a tank crew member, you would want to run away as fast as possible if an unfriendly A-10 attack jet is flying towards you.

In the video, Air Force F-35 fighter pilot Maj. Justin ‘Hasard’ Lee interviews A-10 pilot Capt. Todd Baumann about the capabilities of the legendary Warthog, which has a 30-year reputation of killing enemy tanks and saving friendly ground troops in the nick of time. With its 10 weapons stations, the jet can drop an arsenal of bombs, rockets or missiles on enemy tanks, but the A-10’s most famous weapon is the 30mm GAU-8/A Gatling gun that stretches about half the length of the plane’s fuselage.

With its seven barrels, the gun makes a distinctive BRRRT noise when it fires. Baumann explained that BRRRT comes in three flavors: target practice rounds, high-explosive incendiary rounds and armor-piercing incendiary rounds. The target practice rounds are “full-metal, steel jacket,” Baumann said. The high-explosive incendiary rounds, meanwhile, basically have the explosive effect of small grenades. You would not want to be on the business end of either of those rounds, but the armor-piercing incendiary (API) rounds present a particularly nightmarish threat to armored vehicle crews.

The API is famous for a depleted uranium slug inside the round that basically bores into enemy armor when it makes contact, Baumann explained. The uranium is so dense that when the metal jacket surrounding the slug peels away, the uranium “self-sharpens” to drive deeper into the target armor, the pilot said.

“So unlike tungsten or other metals that will basically curl up and prevent further penetration, the uranium round, due to ablation, will actually sharpen to more of a point so it’ll be able to bore into armor a little further,” Baumann said.

But that’s just the start of the armor-piercing incendiary horror movie. When the uranium slug goes through the armor and into the cockpit or crew compartment, it “will be catastrophic to the people inside,” the A-10 pilot said. But the slug also pushes forward the armor that was in its way during the slug’s journey from the outside of the tank to the inside. Now, instead of just a uranium slug flashing into the crew area at ridiculous speed, there are also bits of the metal tank armor flying in too. The armor that the crew was relying on for protection just a moment ago is now being used as a weapon against them.

Not only that, but the depleted uranium in that state has a pyrophoric property, Baumann explained, which means it can “ignite instantly upon exposure to oxygen,” according to Purdue University. So not only is there shrapnel inside the crew compartment or engine block, but the shrapnel might also be on fire too.

“It’ll basically allow super-heating and potentially fires from the inside,” the A-10 pilot said. “From our recent tests that’s exactly what we saw: even with a non-fueled tank it will cause a lot of effects inside of there.”

Armor-piercing incendiary rounds are a scary weapon, but Warthog pilots have not used them very much in the past 15 to 20 years. The reason? Not many armored targets to use them on, explained retired Air Force Lt. Col. Gregg Montijo. Armor-piercing incendiary rounds “go through soft targets very cleanly and don’t do much damage unless they hit a critical component,” said the former A-10 pilot. “The type of targets in Iraq and Afghanistan did not warrant using API.”

Instead, most of the A-10 missions flown over Iraq and Afghanistan used a mix of target practice and high explosive rounds, Montijo said. The target practice round is “a solid slug of metal and has considerable mass to it,” he explained, while the high-explosive round “sets things on fire like gas tanks, etc. Mix the two rounds and you have a very lethal mix effective on a wide range of targets.”

Not so much for armor-piercing incendiary rounds, though their effect on armor is still terrifying. Montijo said the effect of API rounds on a tank is like that of a BB pellet hitting glass. The front slide of the glass has a very small hole, but the back side is blown out with lots of shrapnel.

“Now think of all those little pieces of glass flying around inside a tank at about three times the speed of sound (impact velocity) and they are also very, very hot,” the pilot explained. “Not a pretty picture.”

Montijo saw some of that picture himself while touring the “graveyard” of destroyed Iraqi vehicles in Kuwait after Operation Desert Storm in 1991, where A-10 Warthogs first earned their reputation as tank killers. The destroyed vehicles “were not pretty,” he said, and some were cordoned off due to the very low level of radiation emitted by the depleted uranium rounds.

The radiation is part of why the Air Force considered scrapping depleted uranium armor-piercing incendiary rounds in recent years. In 2019, the military was looking into dismantling and disposing of more than 35 million rounds of ammunition with depleted uranium cores, most of which were the armor-piercing incendiary rounds fired by the A-10, The War Zone reported. One of the biggest reasons may be that the ammunition is becoming too old to use. In May, 2018, the average age of an A-10 bullet was 32 years old, according to Military.com.

“We’ve got to buy new,”  Bob DuPont, from the Air Force 780th Test Squadron’s guns and missiles department, told Military.com at the time.

The War Zone reported in 2019 that the U.S. government said there is no conclusive evidence linking depleted uranium rounds to health issues, but it is also difficult for researchers to go to places like Iraq to conduct field studies that would settle the issue. In 2018, DuPont suggested using tungsten as a replacement for depleted uranium. But while tungsten has fewer environmental health concerns, it is also less dense than uranium so its performance may not be at the same level against the toughest tank armor, he told Military.com. Though that may not matter in counter-insurgency wars like those in Iraq and Afghanistan, it could be a problem against modern tanks used by potential adversaries such as Russia and China, The War Zone reported.

The Air Force’s Air Combat Command said that it is still using armor-piercing incendiary rounds, albeit in smaller quantities than it used to. Alexi Worley, a spokesperson for Air Combat Command, said the service is beginning to field belts of 30mm ammunition that feature a mix of two armor-piercing incendiary rounds for every one high-explosive incendiary round. That ratio is a little lower than the old ratio of five API to every one HEI, “which has expired and was removed from the Air Force active inventory,” Worley explained. But the new rounds will not be used in training, she said, as they are primarily for combat as part of the military’s war reserve materiel.

Still, the A-10 has plenty of other weapons to choose from when it comes to killing tanks, including laser-guided rockets like the AGR-20, which Baumann explained in the recent YouTube video.

The cool thing about the AGR-20 is that it can be “buddy-lased” into a target, where another aircraft can laser guide the missile into the target even if it’s launched from a separate A-10, Baumann explained. Another weapon is the AGM-65 Maverick.

“This is a tank buster,” the pilot said about the missile, which he said can be guided with lasers, infrared or cameras. “We have seen this be extremely effective.”

Though the A-10 has plenty of options when it comes to busting tanks, its future role in the U.S. Air Force is uncertain. Last week, when Air Force Secretary Frank Kendall floated the idea of sending Warthogs to Ukraine to help their fight against the Russian military, Ukrainian leaders demurred, saying the slower jets would not perform the mission they need to accomplish, Air Force Magazine reported.

“If we look at these needs of the Ukrainian Air Force today, it kind of leads us to conclude that the most optimal option would be something fast and versatile, and fast and versatile are F-16 [fighter jets],” Yuriy Sak, adviser to Ukraine’s minister of defense, told Air Force Magazine.

Despite its slow speed, the A-10 could still play a vital role in a large-scale conflict against Russia or China, one Warthog pilot said. Maj. Maurice “SPAWN” Grosso wrote in a May essay for Task & Purpose that the jet can bring in new weapons like the ADM-160 Miniature Air-Launched Decoy, which essentially launches decoys that crowd and confuse an enemy air defense picture and complicates “their tactical decision-making,” he wrote. A four-ship formation of A-10s could launch up to 64 MALD to wreak havoc on an enemy’s air defense, which could then increase the survivability of stealthy, expensive aircraft like the F-35 or F-22 fighters. The A-10’s comparatively low maintenance footprint and ability to launch from makeshift runways also allow it to be operated relatively close to the front lines, Grosso argued.

Beyond the MALD, there’s also the AGM-158 Joint Air-to-Surface Standoff Missile, an air-launched cruise missile which the A-10 could possibly carry more of than almost any other fighter in the Air Force arsenal, Grosso said.

“Imagine a rapidly-deployable force of non-nuclear fighters that can operate from the most austere locations with a minimal footprint while providing long-range fires, decoys, electronic attack, and mission support,” Grosso wrote. “That vision is achievable at minimal cost by using assets and capabilities that the Air Force already has, but simply needs to integrate.”

That asset is the A-10, and no matter if it fires armor-piercing incendiary rounds, cruise missiles, or decoys, it has plenty of BRRRT to go around.

Update: This story has been updated to include the rank of Capt. Todd Baumann.