A bit of budgetary gamesmanship by the Air Force earlier this month seems to have paid off, as the House... 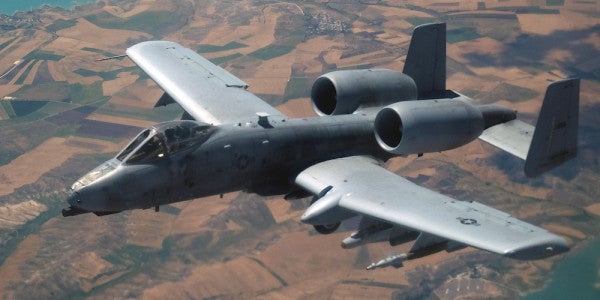 A bit of budgetary gamesmanship by the Air Force earlier this month seems to have paid off, as the House Armed Services Committee has allotted money to keep the vaunted A-10 Thunderbolt in the air, according to Defense News.

The committee chairman's draft of the fiscal year 2018 National Defense Authorization Act includes $103 million for an unfunded requirement related to the A-10 that the Air Force included in its budget request.

The $103 million, plus $20 million from this fiscal year, will go toward restarting production of A-10 wings to upgrade 110 of the Air Force's 283 Thunderbolts.

Defense experts told CNN earlier this month that the Air Force's inclusion of the A-10 wing money in its unfunded requirements was likely a ploy to get Congress to add money for the venerable Thunderbolt on top of the money apportioned for the service branch's budget request.

Members of the House Armed Service Committee looked likely to approve money for the A-10, which is popular among both service members and elected officials like committee member Rep. Marth McSally, herself a former A-10 pilot, and Sen. John McCain.

McSally noted during a hearing earlier this month that the Air Force had committed to retaining just six of its nine squadrons of A-10s and pressed Air Force officials to outline their plans for the fleet.

The Air Force currently plans to keep the A-10 in service over the next five years at minimum, after which point the fleet will need some maintenance. US Air Combat Command chief Gen. Mike Holmes told Defense News this month that without new wings, those 110 A-10s would have to go out of service, though he did say the Air Force had some leeway with its resources.

“When their current wings expire, we have some flexibility in the depot; we have some old wings that can be repaired or rejuvenated to go on,” he told Defense News. “We can work through that, so there’s some flex in there.”

The Air Force has been looking at whether and how to retire the A-10 for some time, amid pushback from elected officials and increased demand for close air support against ISIS, in which the A-10 specializes.

The five-year cushion described by Holmes gives the service more time to evaluate the aircraft and whether to replace it with F-35s or another aircraft.

The National Defense Authorization Act only approves a total amount of funding, Defense News notes, which means others in the House and Senate could choose to direct those funds to projects other than the A-10's refurbishment.

The Air Force's priorities may change as well.

Air Force Secretary Heather Wilson told Defense News that the service had a defense strategy review in progress, after which the service life of the A-10 — which has been in the air since 1975 — could be extended. Though, Wilson said, the Air Force has a number of platforms that need upgrades.