The U.S. Air Force has completed the initial phase of its OA-X Light Attack Experiment at Holloman Air Force Base,... 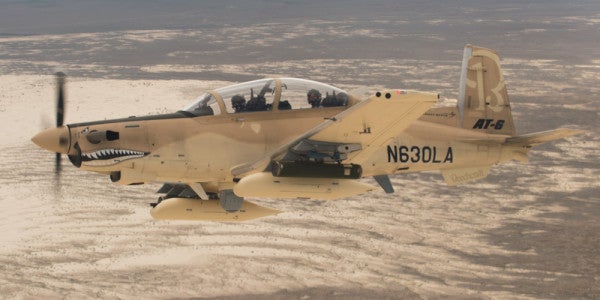 The experiment put the Sierra Nevada/Embraer A-29 Super Tucano, Beechcraft AT-6 Wolverine, Textron Scorpion Jet and the Air Tractor/L3 Platform AT-802L Longsword through their paces in various operational scenarios that the aircraft might face in combat. Among the scenarios were close air support, air interdiction, combat search and rescue, strike coordination and reconnaissance missions. The Air Force’s pilots used a mix of weapons generally employed by tactical aircraft for its evaluation. Among the evaluators were three Air Force test pilots from Edwards Air Force Base in California.

“416th pilots were selected based on the desire to have test pilots evaluate handling qualities, performance, and pilot-vehicle interface characteristics of the experiment aircraft,” Maj. Ryan Fancher, 416th FLTS assistant director of operations at Edwards AFB, said in an Air Force release. “This evaluation was completed in conjunction with separate flights by operational test pilots to get a fairly comprehensive look at the aircrafts' capabilities and mission suitability.”

As test pilots, the Edwards personnel examined the flight characteristics and flight controls of the four aircraft. “After the experiment sortie, each pilot submitted a pilot report and a separate survey in order to capture pertinent handling qualities, performance and (pilot-vehicle interface) aspects of the aircraft,” Fancher said.

While the flying portion of the OA-X experiment is now complete, the evaluators still have to write their reports and submit their findings. Once it evaluated the data, the Air Force might test the aircraft during actual combat operations in a current theatre of war. Potentially the aircraft could be sent to Afghanistan or Iraq where there is little in the way of a surface-to-air threat and no air-to-air threat. Indeed, if the OA-X experiment pans out, the service might buy a number of light attack aircraft to take the burden off the Air Force’s fleet of fourth and fifth-generation fighters.

“I would expect this fall, or certainly by December or January, that we would make a decision on whether to do a follow-on experiment—it would be a combat experiment—and which aircraft might participate in that,” U.S. Air Force Secretary Heather Wilson told my colleague Valerie Insinna at Defense News. “We would probably bring it to the theater. I’m not sure exactly what missions they would run, but one of the things we can do is see how it connects up with command-and-control systems, those kinds of things.”

Certainly, a fleet of OA-X aircraft would ease the burden on the Air Force’s expensive fourth and fifth-generation aircraft, which cost tens of thousands dollars per hour to operate. A production OA-X would also provide airpower options for allies who might not be able to afford—or even need—an aircraft like the Lockheed Martin F-16C Fighting Falcon or the stealthy F-35 Joint Strike Fighter.