Officials with the National Transportation Safety Board slammed the Navy for a series of failures that contributed to the August 2017 collision between the destroyer John S. McCain and Alnic MC, a Liberian-flagged oil tanker near the Singapore Strait 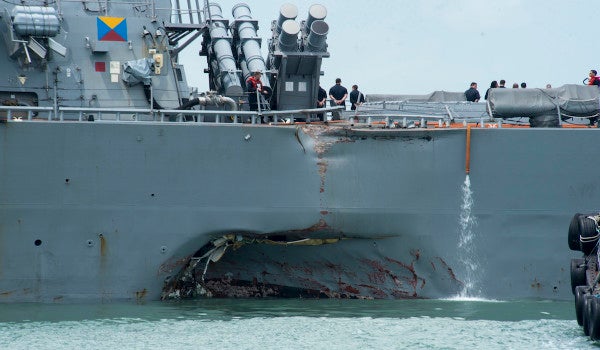 Insufficient training, severe fatigue and a lack of oversight led to a fatal 2017 Navy collision near Singapore, according to a damning new report from a government agency charged with investigating major accidents.

Officials with the National Transportation Safety Board slammed the Navy for a series of failures that contributed to the August 2017 collision between the destroyer John S. McCain and Alnic MC, a Liberian-flagged oil tanker near the Singapore Strait.

The accident, which tore a 28-foot hole through the McCain's hull below the waterline, was the second of two fatal Navy collisions in the region that summer. Ten McCain sailors were killed in the collision, just months after seven others died when the destroyer Fitzgerald slammed into a container ship off the coast of Japan.

“The NTSB concludes that the Navy failed to provide effective oversight of the John S McCain in the areas of bridge operating procedures, crew training, and fatigue mitigation,”the report, which was released Monday, states.

Interviews with several bridge watchstanders showed they were unfamiliar with or had the wrong understanding of the ship's steering system, the report states. Some were qualified on a cruiser, which didn't have the same bridge and navigation system the McCain used.

Bridge training for the McCain was “inadequate,” the report states, “because it did not ensure that the crew could perform the basic functions of the watch.”

That was in line with what Navy investigators found following the fatal accident.

“Multiple bridge watchstanders lacked a basic level of knowledge on the steering control system, in particular the transfer of steering and thrust control between stations,”they wrote in a 2017 report.

“The CO's superiors were required to assess and certify that the destroyer was safe to operate and that the watchstander qualification system was effective,” the report states. “The John S McCain crew's inability to effectively respond to the emergency calls into question the Navy's assessment and certification process.”

Navy leaders also failed to address ongoing concerns about fatigue among crews. Several people on the McCain were “acutely fatigued,” the National Transportation Safety Board found. With crews responsible for handling weapons and other important missions, tired Navy operators “are as dangerous, if not more dangerous, than commercial operators.”

Lt. Tim Pietrack, a Navy spokesman at the Pentagon, said the service is grateful for the safety board's efforts to improve maritime safety. The Navy reached many of the same conclusions, as the NTSB, he said, and as of July has implemented more than 100 recommendations as the result of reviews following the fatal collisions.

Though Pietrack did not specify which of the safety board's seven recommendations have been implemented, he said many of the service's findings directly address or incorporate the agency's recommendations and “in some cases, go beyond them.”

Aside from systemic problems ahead of the collision, the safety board identified several failures in the immediate lead up to and aftermath of the accident. That included the decision to transfer steering and thrust control between stations in a congested waterway, which increased the risk of an accident, the report states.

The bridge team failed to follow loss-of-steering emergency procedures after losing situational awareness, which should've included alerting nearby vessels. Not doing so “deprived the Alnic MC master of information needed to take action to avoid the collision,” the report states.

The McCain was following Navy protocol at the time when the crew kept the ship's automatic identification system set to receive-only, which meant it wasn't transmitting data to other vessels. Following the collision, the Navy leaders announced that ships would begin broadcasting their locations in congested areas to better prevent accidents.