‘In every uniform is a human being’ — an Air Force vet is on a mission to take portraits of 7,500 veterans in all 50 states

By Veterans' Day this November, former combat photographer Stacy Pearsall will have traveled to all 50 states, snapping stark black-and-white portraits of more than 7,500 military veterans 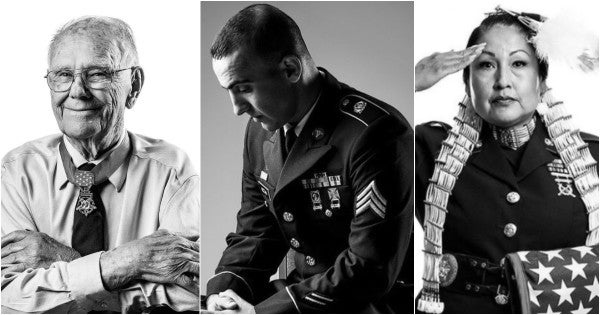 By Veterans' Day this November, former combat photographer Stacy Pearsall will have traveled to all 50 states, snapping stark black-and-white portraits of more than 7,500 military veterans.

Despite the care she takes composing each shot, correcting the lighting and cajoling her subjects to engage with the camera, the photos aren't the main thing. The main thing, for her, is the chance to connect with fellow veterans.

According to the retired Air Force staff sergeant, her “Veterans Portrait Project” began as a sort of self-styled therapy as she recovered from a neck injury and head trauma that resulted from a roadside bomb blast in Iraq in 2007. She said it remains a balm for the physical and emotional aftermath of her experience.

Earlier this month, Pearsall set up her mobile photo studio in the enormous Boeing Center atrium at the National World War II Museum in New Orleans. Antique bombers and fighter planes hung from the high ceiling above her, as former soldiers, sailors and Marines took turns in front of her lens.

Aside from the decorated baseball caps and T-shirts that commemorated their units and theaters of operation, the veterans looked just like anyone else. Their experiences and sacrifices were invisible.

But as Pearsall posed them and asked questions about their pasts, the significance of their service shone.

“Combat veterans tend to withhold a lot from others,” Pearsall said. “Their experiences have injured them and they don't want to project that injury on others.”

Pearsall suspects that if she weren't a combat veteran herself, some of the vets might be more reluctant to participate in the photo process or to share their stories. And it doesn't hurt that her service dog Charlie lay nonchalantly on the photo set, exuding an attentive but utterly relaxed vibe.

It's difficult to describe the “sights, sounds, smells, memories and feelings of unworthiness” that some combat veterans carry with them, Pearsall said. They wonder, “Why do you want to know my story?”

Pearsall said that their experiences validate her emotions, and she hopes her photography validates theirs. She said her exchanges with the vets are “invaluable” and her photos are the “byproduct.”

Vietnam War veteran Francisco Lopez posed seated on a stool, with his hands perched atop his cane. He smiled broadly as he gazed through his glasses. Lopez, 72, said he was born in Honduras but immigrated to the U.S. in 1961. By 1968, he said, he was an Army combat medic giving first aid to fellow soldiers during the intense fighting of the Tet Offensive. He said he earned a Purple Heart for a shrapnel wound and a Bronze Star for heroism.

As Pearsall, who was the recipient of the Bronze Star and Air Force Commendation Medal with Valor, arranged to photograph Lopez, she asked if he knew how many wounded men he may have helped.

There were too many to remember, he said.

Lopez told Pearsall that he thought he would be appalled by blood, but when the fighting began he quickly became hardened to it.

“I was in combat for 10 months,” he said in an interview after the shoot. “In a while, all your emotions are gone. You don't complain. Your friends die and you don't feel anything. Back in civilian life, those emotions are still pretty low.”

Lopez, who lives in Uptown New Orleans, said that the fact Pearsall had combat experience really didn't matter to him. He would have happily posed for a commemorative portrait anyway. But he also said there are unspoken bonds between those who have been under fire.

He and an old friend who also served in the Vietnam War rarely mention their combat histories, but they always know that deep down they have something important in common, Lopez said.

Lopez plans to present Pearsall's portrait of him to his granddaughter. Asked how it felt to be ceremoniously photographed as part of Pearsall's project, he said it made him feel a bit “grandiose.” But it also affirmed his pride.

The day after her New Orleans photo shoot, Pearsall traveled to Arkansas to engage in more exchanges with veterans. “People think veterans are statuesque, unbreakable and impenetrable,” she said over the phone as she waited for her plane to depart. “I want people to realize that in every uniform is a human being with a heart and a soul, people they love, history and baggage. I want every veteran to know they're thanked.”