A Lawmaker Calls For A Congressional Probe Following McCain Collision

As the Navy works to recover sailors’ bodies from flooded portions of the damaged U.S. destroyer John McCain in Singapore,... 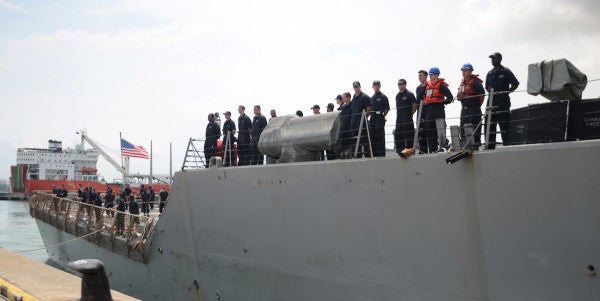 As the Navy works to recover sailors’ bodies from flooded portions of the damaged U.S. destroyer John McCain in Singapore, a San Diego congressman is calling for a congressional investigation of the Navy’s string of deadly ship mishaps in the Pacific.

Democratic Rep. Scott Peters issued the request on Tuesday, saying that a “thorough investigation” could focus on whether the Navy’s operations tempo has become too high to be safe, and if the sea service has enough resources to do its job properly.

Peters suggested that the investigation could be done by the House Armed Services Committee, on which he sits.

“These tragic, senseless collisions have taken the lives of too many brave sailors,” Peters said in a statement.

He added that while he supports the Navy’s own investigation of its Pacific fleet, announced yesterday, “It is Congress’ duty to provide our service members with the resources they need to carry out their missions safely and effectively.”

In the predawn darkness of Monday morning, the McCain collided with a merchant ship near the busy Strait of Malacca and Singapore.

The Arleigh Burke-class destroyer suffered a car-sized gash on its left, or port, side. Crew sleeping areas and machinery and communications rooms were flooded before the McCain crew regained control of the ship.

The Navy has now recovered the bodies of some sailors in the flooded compartments. Another body recovered by the Singapore navy at sea may also be one of the 10 missing from the McCain.

The collision bears a resemblance to — and comes just two months after — another Navy destroyer, the Fitzgerald, collided with a merchant ship off Asia. Seven American sailors were killed in their flooded sleeping chamber. The two senior officers and senior enlisted sailor have been removed from their posts.

In May, a South Korean fishing boat hit the cruiser Lake Champlain, with no injuries.

That string of collisions follows the U.S. cruiser Antietam running aground in Tokyo Bay in January.