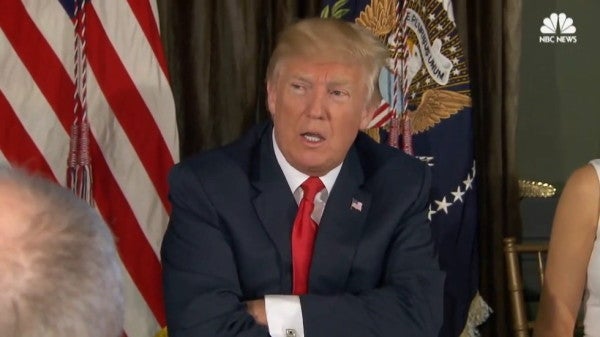 The letter, which was written by Undersecretary of Defense for Policy John Rood, was sent in May to congressional leaders and committees. In it, the Defense Department said it worked with the State Department to determine that Ukraine had “taken substantial actions to make defense institutional reforms for the purposes of decreasing corruption, increasing accountability, and sustaining improvements of combat capability enabled by US assistance.”

The federal analysis is required by law for the US to dispense military aid funds to Ukraine, in order to provide defensive capabilities to the country — including “training, equipment, and logistics support, supplies, to the military and other security forces.”

The contents of the letter conflicts with the Trump administration's assertion that Ukraine was not doing enough to combat allegations of corruption. One senior US official told The Washington Post on Monday that the withholding of funds were due to Trump's belief that there was “a lot of corruption in Ukraine.”

“If there's corruption and we're paying lots of money to a country, we don't want a country that we're giving massive aid to to be corrupting our system,” Trump said to reporters on Sunday.

According to The Post, Trump instructed acting White House chief of staff Mick Mulvaney to withhold nearly $400 million in military aid to Ukraine shortly before his July 25 phone call with its newly elected president, Volodymyr Zelensky.

The funds were eventually released September 11, but the administration cited “concerns” and told congressional lawmakers that the delay was due to an “interagency process.”

Democrats have scrutinized the delay in the dispersal of funds, which the Trump administration had already said it intended to approve in February and May.

Trump has come under increased pressure following the revelation of a whistleblower complaint lodged in August by a member of the intelligence community, which is linked to Ukraine.

It is unclear if Trump pressured President Zelensky to investigate unfounded allegations against a political opponent — former vice president and 2020 Democratic candidate Joe Biden and his son Hunter — as a condition for receiving the military aid funds.

Trump denied there was a “quid pro quo” arrangement during his discussions with President Zelensky, who met the US president at the United Nations building in New York on Wednesday.