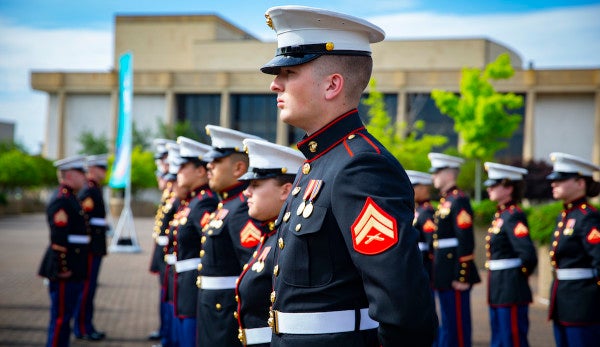 On Tuesday, Dunn donated his uniform so that Jackson — who died as a result of a hit-and-run on Sunday — could be buried in it with honor, according to the Conshohocken VFW Post 1074 commander, Walt Hartnett.

“He said, 'The uniform just hangs there. I'll go buy another one for when my time comes,'” Hartnett said of Dunn. “He was honored to be able to give it to a Marine.”

Jackson, 67, was struck by a car while standing beside his own vehicle about 6:30 p.m. Sunday on the 600 block of Astor Street in Norristown, police said. He was transported to a hospital, where he was later pronounced dead.

The driver of the striking vehicle, who was reported to be traveling at high speed, did not stop, according to authorities.

On Wednesday, Norristown police announced that Nemias Perez-Severiano, 31, of the 200 block of East Main Street, was arrested in the case. Perez-Severiano was charged with accidents involving death and related offenses, and was remanded to the Montgomery County prison with bail set at $200,000.

Jackson served in Vietnam in 1970 and 1971 and was honorably discharged as a corporal, according to the Montgomery County Veterans Affairs Office.

He was killed on the 244th birthday of the Marine Corps, and the first day his loved ones woke up without him was Veterans Day.

Dennis Miller, director of the Veterans Affairs Office, said Jackson was a friend of the office who was humble about his service.

Following his death, Jackson's family spoke with Miller about wanting military honors for his funeral, but said they had no idea what had happened to his Marine Corps uniform.

Miller spoke with Hartnett at the Conshohocken post, who then posted to the VFW's Facebook page asking if anyone was willing to donate a uniform “for this fallen comrade.”

“It's one of those things. You served, you wore that uniform; for some people, it was probably some of the proudest memories of their life,” Hartnett said. “It's just something that they wanted to have happen, and everybody can understand and respect that.”

Hartnett was overwhelmed by the offers that poured in — some people wanted to take up collections to buy Jackson a uniform, others wanted to donate their own. People from as far away as Mississippi called to see how they could help.

“The response was amazing,” Hartnett said. “I was getting calls from all over.”

Hartnett said he accepted Dunn's offer because it was among the first and he was close to Conshohocken.

Dunn was adamant about not wanting recognition for his donation. He had to be persuaded to have his name included in this article.

“I did it because a fallen Marine needed it,” he said. “It's just what we do.”

Hartnett said he's still looking for a Marine hat and noncommissioned officer belt to go with the uniform, though he's got a couple of leads.

Dunn was not a member of the VFW because he had not served overseas or in a war, Hartnett said, but the post made him a social member following his donation.

Miller, a former commander with the Coast Guard, said he, too, was moved by the uniform donation.

“It's symbolic, it's sentimental, but in a case of crisis like this, it's important,” he said.

A viewing will be at Paoli United Methodist Church, 81 Devon Rd., from 9 to 11 a.m. Saturday, Nov. 16, with funeral services beginning at 11. Burial will be at Washington Crossing National Cemetery in Newtown next week.