Ships from the USS Abraham Lincoln carrier strike group and other cruiser-destroyer units based at Naval Station Norfolk sailed into... 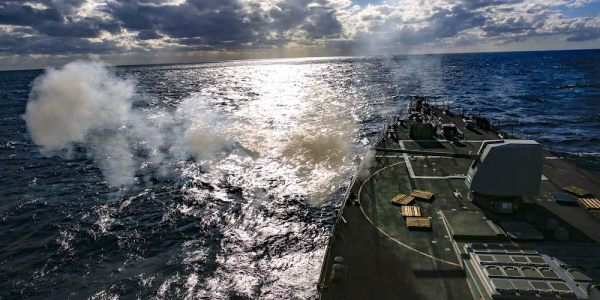 Ships from the USS Abraham Lincoln carrier strike group and other cruiser-destroyer units based at Naval Station Norfolk sailed into the Atlantic earlier this month for the East Coast's first Surface Warfare Advanced Tactical Training, or SWATT, exercise with a carrier group.

SWATT is a relatively new addition to the Navy's training repertoire, and it comes a years-long period in which the force was focused on anti-piracy and other high-sea policing operations rather than on a high-end fight against a sophisticated adversary.

SWATT exercises are led by warfare-tactics instructors from the Naval Surface and Mine Warfighting Development Center, or SMWDC, which was set up in 2015 to help the Navy develop experts in surface warfare operations.

The exercises are meant to take place in between ship exercises where a crew trains and qualifies for its missions and advanced exercises where an entire amphibious ready group or carrier strike group gathers to train.

The idea is deploy instructors, both senior and junior surface warfare officers with specific training, to train with other sailors in the group, imparting advanced knowledge of weapons and tactics — similar to the Navy's “Top Gun” training for aviators.

Instructors aim to inculcate a process of planning, briefing, executing, and debriefing among a ship's crew. “This model utilizes a crawl-walk-run approach,” Van Wagoner said, “allowing teams to build and develop skills as they move from basic to more advanced events.”

Setting up SMWDC three years ago was “the beginning of an important cultural shift in the surface fleet to rapidly increase surface force tactical proficiency, readiness, and combat capability,” Rear Adm. Dave Welch, the SMWDC commander, said in a Navy release.

“This first East Coast CSG SWATT represents our commitment to the entirety of the surface force,” he said in the release. “SWATT provides a critical path for warfare and strike group commanders to develop the combat capability needed by our numbered fleet commanders to compete effectively in an era of great-power competition.”

As with SWATT, the reactivation of 2nd Fleet was part of preparations to fight an opponent who can fight back.

“Our National Defense Strategy makes clear that we're back in an era of great-power competition as the security environment continues to grow more challenging and complex,” Adm. John Richardson, the chief of US naval operations, said at the reactivation ceremony.

The Navy has made a number of changes in response to that competition, including shuffling carrier deployments to inject some unpredictability into their operations — part of the “dynamic force employment” concept touted by Defense Secretary Jim Mattis.

In July, the USS Harry S. Truman and its strike group returned to Norfolk after just three months at sea rather than the typical six-month deployment.

In October, the Truman sailed north of the Arctic Circle, the first carrier to do so since the early 1990s, where it joined forces from every other NATO member for exercise Trident Juncture, which NATO officials have said is alliance's largest exercise since the Cold War.