A retired Marine died of heatstroke after caretakers left him in the sun in a wheelchair, lawsuit says

Gene Rogers died from heat stroke after allegedly being left alone on a patio in his wheelchair, then forgotten about for hours outside as the summer heat built 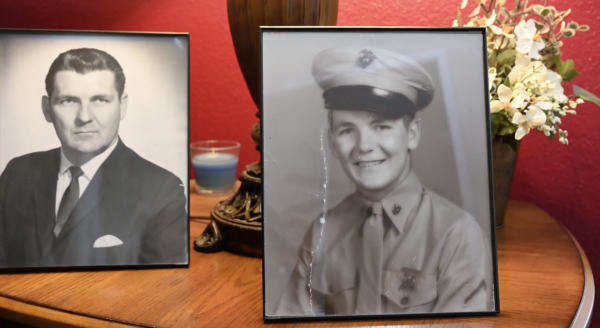 Gene Rogers lived a large life before dementia began to chip away at it.

A former Marine who signed up at 17 and fought in Korea, Rogers went on to become a stock car racer, earned an electronics degree and spent more than three decades working for AT&T as he and his wife, Kathryn, raised three boys during their 60-year marriage.

He spent his retirement in Carlsbad, living near Camp Pendleton where he started in the Marine Corps and where his passion for golf took him to a course nearly every day.

Then, he got sick.

Faced with the reality that 81-year-old Kathryn couldn't care for him alone, the family sold the Carlsbad home, banked the proceeds and found a pleasant, $5,540-a-month assisted living facility where Rogers could receive around-the-clock care in a secure environment.

On Dec. 30, 2017, Rogers went to live at Meadow Oaks of Roseville, a tan stucco facility along Linda Creek that touts itself as offering “well-being and a positive, active lifestyle.”

Six months later, the 83-year-old Rogers was dead from heat stroke after allegedly being left alone on a patio in his wheelchair, then forgotten about for hours outside as the summer heat built. State licensing officials investigated the death and in October, announced their fine: $1,000.

But the Rogers family is far from satisfied with the results of the state's investigation, which they said has left them with numerous questions about what happened to Gene Rogers.

“It was June the 30th, the hottest day of the year so far,” his son Jeff said in an interview with The Sacramento Bee. “We got a call late in the day and they said, 'Hey, your father's being taken to the hospital to get checked out.' They weren't specific about what happened. They just said, 'We're hoping to have him checked out. Seems like he's OK.' There was no panic in their voice.

“Then I got a call from the hospital and they said he came in in critical condition, and I was like, 'What are you talking about?' He was completely unresponsive to anything but pain stimuli, his skin temperature was like 104, they had to bag him in what they refer to as a cooling bag to get his skin temperature down.”

An investigation by the state Department of Social Services' community care licensing division found that “staff failed to provide adequate care and supervision” and levied the fine, which was doubled from $500 because “you have been cited for repeating the same violation within 12 months.”

State records show that 24 days after Rogers was left on the patio, another resident living at Meadow Oaks with her husband “was able to leave the facility unattended” at 7 p.m. on July 24, 2018. That resident “fell outside on the street while walking and 911 was called,” a state facility evaluation report dated Aug. 6, 2018, states.

Westmont Living, the La Jolla-based company that operates Meadow Oaks, did not respond to telephone and email requests for comment.

Rogers' death has spawned a wrongful death lawsuit filed on behalf of his family by Sacramento attorney Sean Laird, as well as an enhanced review of whether the facility should face a fine of up to $15,000, the most allowed under state law, according to elder care advocate Carole Herman.

The case also has raised questions about the events that led to Rogers' death, with the family and the lawsuit alleging that staff members gave conflicting stories about what happened that day.

Rogers' family said they had high hopes when he was placed at Meadow Oaks, a location they preferred after looking at other options and deciding he was better off near Sacramento rather than the San Diego area, where monthly residential fees could easily top $10,000.

They also said things appeared to be going well for Rogers at the facility, where he enjoyed watching “The Big Bang Theory” on television and playing chess and checkers with a young staffer who had taken a liking to him. Family members visited on Sundays, once bringing along four generations of relatives.

But problems began to emerge, according to Jeff Rogers and his mother, who said they began to notice his hygiene was beginning to suffer and that they found him alone on the patio several times.

“This complete neglect led to a variety of harm to (Rogers) at Meadow Oaks, where he was unkept (unkempt), unmonitored and recklessly neglected,” according to the family's elder abuse and wrongful death suit, which was filed in Sacramento Superior Court in November. “On multiple occasions family members found (Rogers) unattended in his wheelchair on the patio where he was left for long periods of time, without assistance, and would become groggy and difficult to understand.”

“Family members, on multiple occasions, instructed the facility not to leave him outside unattended,” the suit reads.

Despite that, Rogers ended up on the memory care patio of the facility after breakfast about 9:45 a.m. June 30, the state's report on the incident states.

The report was compiled after a complaint was filed by Herman, president of the Foundation Aiding the Elderly, or FATE, in Sacramento, on behalf of the family.

“On 6/30/18, during a heat storm with temperatures hovering around 103 degrees, Mr. Rogers was left unattended on the patio of this facility for an estimated 3-4 hours and suffered from extreme heat exposure which caused him to suffer a heat stroke,” Herman's complaint states.

That staffer, who is identified as “S2” but not named, went to lunch from 10:35 a.m. to 11:10 a.m., and investigators who interviewed three other staffers who were on duty that day “could not confirm that S2 found a replacement caregiver to cover her lunch break,” the state's report states.

During the lunch break, there was only one other staffer on duty, and that worker told investigators she did not cover for the woman during lunch, according to the report.

At 11:30 a.m., two workers went outside to bring Rogers back inside for lunch and “found him unresponsive,” the report says.

“Ambulance records, however, revealed that 911 was called at 12:04 p.m.,” the state's report says. “(Rogers) had been sitting outside for 1 hours, 45 minutes or longer when temperatures were increasing and reached 93 degrees by 12 PM when emergency services were called.

“The temperatures were verified by a local city weather graph. When (Rogers) arrived at the hospital, his body temperature was 103.4 (F), he was dehydrated, and had multiple areas of sunburn (basic blister burns)/redness on body.”

Rogers was admitted to intensive care, but family members said doctors told them there was little hope for him, and that at one point he became unable to swallow. He was moved to hospice care and died July 14. The cause of death was listed as “heat stroke due to prolonged exposure to sun and heat,” the state report found.

The report initially was classified as “confidential.” But after inquiries by The Bee, social services officials released the report and filed a new copy of it, noting that the original “was inadvertently marked 'confidential' instead of 'public.' “

The Rogers family alleged in their lawsuit that Meadow Oaks frequently did not have enough staff on hand to supervise residents. Jeff Rogers said he was present when one resident managed to slip out the front door of the facility unnoticed, and said he had to alert staffers.

“In fact this facility had been cited by the state of California for inadequate staffing based on multiple events in 2017 and 2018,” the Rogers lawsuit states.

The Rogers family said they believe Gene Rogers died simply because staffers forgot he was on the patio and left him there.

“I went down there and I said, 'What happened…?' ” Jeff Rogers said. “The only person that gave me their story was the director. It was like she was reading from a script: Dad got himself outside like he often did, he was checked on and given water at regular intervals and that's when he got himself back inside.

“Well, someone's handing me a boatload there,” Rogers said, insisting that his father could not have wheeled himself out the door and certainly could not have gotten back inside through a door that he said was kept locked. “It seemed like something was being covered up.”