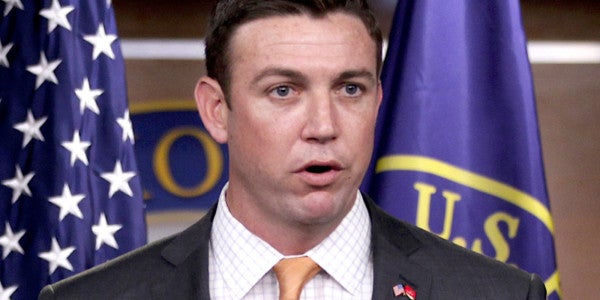 Wilske is the first Republican challenger to officially declare his candidacy for Hunter's seat. Temecula Mayor Matt Rahn and El Cajon Mayor Bill Wells, who mounted a challenge for Hunter's seat in 2018, have both filed paperwork to run for the seat.

Hunter, a six-term incumbent, is set to go on criminal trial in September on charges that he and his wife, Margaret, stole $250,000 in campaign funds. They have pleaded not guilty.

Wilske said in an interview Wednesday that he would try to win, whether it's in a general or a special election. But Wilske did not criticize Hunter; he praised the voting records of Hunter and his father, former congressman Duncan Hunter Sr., who previously held the seat for 28 years.

Wilske stressed the importance of ensuring San Diego's congressional delegation has at least one Republican, given the uncertainty of Hunter's future.

“Me running is just me running; it is not about beating up on a fellow combat vet,” Wilske said. “I hope Duncan comes out of this okay, but we're gonna be realistic about it. We've got to be prepared to not vacate that seat.”

Democrat Ammar Campa-Najjar, who came up short in his challenge of Hunter last fall, is vying for the seat again in 2020.

Wilske, 58, is a San Diego native who served in the Navy for 30 years. He has operated a maritime charter business and worked as a consultant for military logistics since retiring from the Navy.

He also has run for elected office before.

In 2014, he unsuccessfully tried to unseat longtime Rep. Susan Davis, D-San Diego, in the 53rd District, which encompasses central and eastern San Diego. He lost by about 17 percentage points.

Then last year Wilske squared off against Assemblymember Randy Voepel in the 71st Assembly District, which covers much of East County from Borrego Springs to Spring Valley and pieces of the Inland Empire in Riverside County.

However, reporting by multiple news organizations including the Union-Tribune found that Voepel did receive a Combat Action Ribbon.

Wilske lost the primary, and Voepel won a second term in the general election in November.

“We're coming to a crossroads as a country and we're beating each other up… we shouldn't be,” Wilske said Wednesday, discussing this run for congress. “We need to stop this nonsense of inviting socialism in … and we need to start getting our arms around what makes us great as Americans and start appreciating each other even when we disagree.”