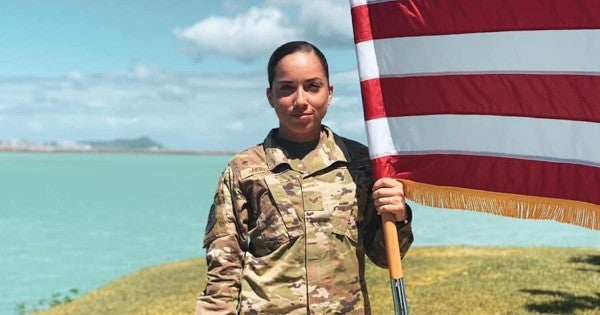 A 27-year-old Air Force senior airman's shock at getting a rebuke for speaking Spanish in uniform in a Starbucks near Hickam and her subsequent stand against discrimination have gained some fervent support on social media.

Xiara Mercado posted July 17 that while waiting for her drink during lunchtime at the Valkenburgh Street coffee shop, she was on the phone speaking Spanish.

Once her name was called, she ended the call and grabbed her drink. As she was walking out, she said, she was tapped on the shoulder by a woman who said, “You shouldn't be speaking Spanish. That's not what that uniform represents. … It's distasteful,” Mercado related on Facebook.

The aeromedical duty coordinator at Joint Base Pearl Harbor-Hickam said she was confused and said, “I'm sorry, ma'am, what's distasteful?”

“You speaking another language that does not represent America and that uniform you are wearing. That's distasteful,” she said she was told by the woman, who appeared to be Caucasian.

Mercado, who is from Mayaguez, Puerto Rico, said she was shocked at the comment but collected her thoughts and told the woman, “I'm sorry, ma'am, the only distasteful thing here is that you are clueless to your discrimination. Please educate yourself. Have a nice day,” and then walked away.

“Our military trains soldiers to speak other languages. It's important. Your ability to speak Spanish is an asset. Spanish is a beautiful language and a huge part of who America is,” said Kacey Nelson.

Elle M. Reff wrote, “Thank you for your service and for knowing the true meaning of being American.”

“That uniform represents all of the elements of this nation! Asian, Hispanics, whites, blacks, etc., and speaks many languages as the country is a melting pot of races, ethnicity and background,” said Gustavo Ojeda.

“I believe you handled it very well and showed her who the bigger person was. Good job! Be safe,” said Valerie Gonzalez.

The 15th Wing at Hickam confirmed that Mercado is a senior airman with the 18th Aeromedical Evacuation Squadron.

“The Air Force recognizes our strength comes from diversity. Our airmen volunteer to serve from across the globe, each bringing their individual talents, to ensure we continue to fly, fight, and win,” the 15th Wing said in an emailed statement.

In two subsequent videos on Facebook, Mercado said the incident happened around 11 a.m. July 17 during a quick stop at Starbucks, “and it wasn't until like 3 o'clock or something that it just bugged me enough that I decided to make a post about it.”

“I personally was very sad,” she said. “I got in my car, and I just texted my friend and was like, 'Something really gross and disgusting happened to me.'”

Posting about what happened was “not about language; it's not about Spanish, like some people are making it seem like it is,” Mercado said. “Honestly, it's a post about discrimination.”

“It's about race, black, brown ethnicity and all those things — discrimination, period. And respect,” she said. “That's what I fight for. That's what I'm in the United States for: to fight for freedom and other people.”

Mercado also said she received a lot of messages, “more than anybody would think,” telling her that actually, she was not supposed to be speaking a language other than English in uniform.

So she looked up the regulation. Air Force guidance referred to as “AFI” dated Jan. 28, 2019 states:

“Somebody sent me the Army version of this,” Mercado said in the video. “Pretty much every other branch has the same thing, just different verbiage.”

She added that “if you are a fellow American serving in the United States Air Force, and somebody is telling you you can't do this, please go to the AFI, point them out, guide them (and) educate them, tactfully,” she said.