Two gunmen opened fire on Staff Sgt. Steven McQueen and fellow soldiers from the 1st Security Force Assistance Brigade from a distance of 20 feet during the Sept. 3 shooting. 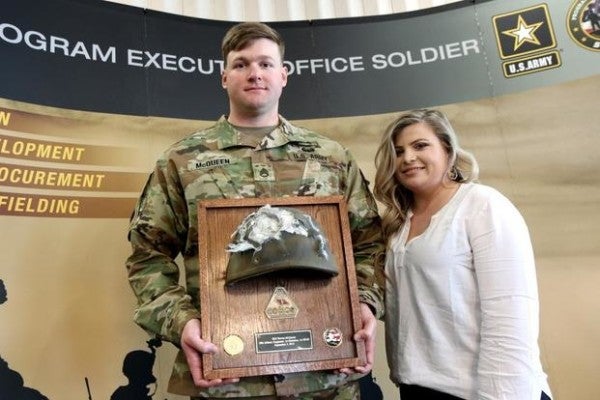 Staff Sgt. Steven McQueen still can't believe how quickly he got to his feet after a bullet from an enemy rifle struck him in the back of his helmet during an insider attack in Afghanistan last year.

Two gunmen opened fire on McQueen and fellow soldiers from the 1st Security Force Assistance Brigade from a distance of 20 feet during the Sept. 3 shooting.

“I was surprised that I was able to react quickly as I did because I knew what had happened instantly; I knew I was shot,” McQueen, 30, told reporters at Fort Belvoir, Virginia, on Monday.

The bullet tore a large hole in the ballistic material, but the Enhanced Combat Helmet (ECH) stopped the round as it was designed to do.

Staff Sgt. Steven McQueen shows a closer view of the hole the enemy rifle round made when it tore into the Enhanced Combat Helmet.(Military.com/Matthew Cox)

“There is nothing that I have experienced in my life that can relate it to,” McQueen said, describing the sensation of being shot in the head. “If I had to guess, I would say if you stood there and let a horse kick you in the back of the head. … It was a lot of force.”

The two men were posing as Afghan police. One was armed with an AK47, the other manned a PKM machine gun chambered for the more-powerful 7.62x54mm Russian round, McQueen said.

“The plan was the fully automatic machine gun was going to open up on us, and the AK was going to pick us off one by one,” he said. “It just so happened that the terrain we were operating in — there was a chokepoint that we were walking through and it was a perfect opportunity, really, to attack us.”

During the ceremony, Brig. Gen. Anthony Potts, head of PEO Soldier, the Armycommand responsible for developing and fielding protective equipment, related a story his dad used to tell him.

“My dad used to have this saying. He would say, 'Son, Superman is not brave,'” Potts said. “I think what my dad was telling me was Superman was invincible. He couldn't be hurt. Well, the reality is our U.S. servicemen and women can be hurt.”

Potts said the job of PEO soldier is to do “everything we can … to make them invincible.”

“We always hope that there is not an incident where you have to prove out that it really does work. And when those times do come — Staff Sgt. McQueen experienced one of those times — we want the equipment to work exactly the way we designed it to work,” he said.

“So not only is this a homecoming and a return for Staff Sgt. McQueen. … What it does for us as a community, for the people at PEO Soldier, is it validates the work that they do on a daily basis,” Potts said.

The helmet that McQueen wore was originally developed by the Marine Corps to provide improved protection from rifle rounds. The Army adopted it and began fielding it to soldiers in 2014.

“What this helmet stopped was a rifle round; that is what that helmet was designed to ,” said Lt. Col. Ginger Whitehead, product manager for Soldier Protective Equipment. “There is no doubt that Staff Sgt. McQueen would not have survived the impact had he not been wearing that helmet.”

PEO Soldier officials have begun an expanded effort to return protective equipment that has stopped enemy small-arms fire or other battlefield threats to the soldiers who wore it, Potts said.

A new process that came out in the fiscal 2019 National Defense Authorization Act allows the Army to return protective equipment involved in a life-saving incident to soldiers who have separated from the service, something that has not been possible in the past, he said.

“Prior to the 2019 NDAA, we really couldn't provide equipment to a separated service member, and now we will have that opportunity here in the near future … and I think that is going to be a big thing for our community,” Potts said.

McQueen, sitting next to his wife Aaron, said the experience has changed his view of equipment that he didn't like wearing in the past.

“So, before this incident … I thought the helmet was cumbersome and that it was overkill,” he said, joking he would have preferred a ball cap. “I was sorely mistaken. This helmet works, and I am a living testimony to it. And from now on, all of my soldiers will wear it. If we are in a hostile environment, they won't take it off. Period.”

SEE ALSO: Lawmakers Are Pushing To Make It Easier For Wounded Troops To Keep Battle-Damaged Gear

WATCH NEXT: Meet The 1st SFAB