The Northeast POW/MIA Network is seeking intervenor status in the case, filed by a veteran against the V.A. Medical Center in U.S. District Court, that claims the presence of the Bible in the display is unconstitutional 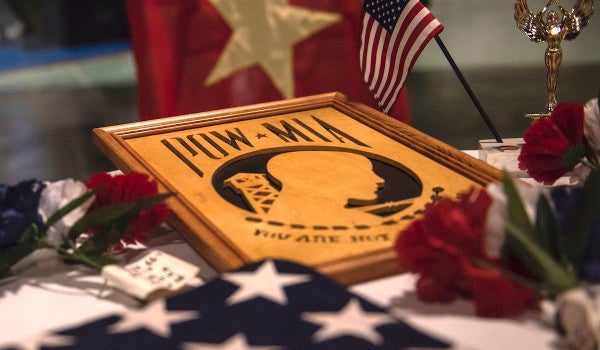 CONCORD, NH — The veterans group that sponsors the oldest continuing POW-MIA vigil in the country is asking a federal court to allow it to intervene in a case that centers on whether a former POW's Bible can be featured in a lobby display at the Manchester VA hospital.

The Northeast POW/MIA Network is seeking intervenor status in the case, filed by a veteran against the V.A. Medical Center in U.S. District Court, that claims the presence of the Bible in the display is unconstitutional.

New Hampshire members of the group were responsible for creating the lobby display.

Every Thursday evening for 30 years, the group has hosted a vigil in Meredith to honor those who were prisoners of war and to keep alive the memory of those who remain missing in action from America's wars. It also sponsors an annual POW/MIA vigil each June that draws hundreds to the shores of Lake Winnipesaukee to remember those still missing.

Last year, New Hampshire members of the network sought and received permission to place a “Missing Man Table” in the lobby of the VA Medical Center in Manchester. Such displays are meant as a remembrance of service members who were POWs or MIAs.

The Manchester display includes a Bible donated by Herman “Herk” Streitburger, a Bedford man who served in the U.S. Army Air Corps in World War II and was captured and held as a German POW before managing to escape. Streitburger, who is now 100 years old, was featured in a recent New Hampshire Sunday News article.

But the display soon drew controversy. The Military Religious Freedom Foundation, based in New Mexico, filed a federal lawsuit on behalf of veteran James Chamberlain, the named plaintiff, claiming the Bible's display violates the Constitution.

Texas-based First Liberty Institute is representing the Northeast POW/MIA Network in its motion to intervene in the case. In court papers filed Thursday, lawyers described the tradition of the Missing Man Table as dating to the Vietnam War and noted such displays have become permanent features at public forums across the nation, including at a public library in Athol, Mass., and a VA hospital in Wilmington, Del.

Typically, such displays contain symbols of those missing, including a slice of lemon to represent their “bitter fate,” salt to represent the tears of their loved ones and an inverted glass signifying their inability to join in a toast.

Last month, in response to a request from First Liberty to clarify the policies governing such displays, the Department of Veterans Affairs issued updated directives stating that “religious symbols may be included in a passive display in public areas of VA facilities.”

In a letter to First Liberty, Juliana Lesher, national director of the VA Chaplain Service, said the July 3 directives “are designed to uphold the First Amendment to the United States Constitution, which ensures that the government does not establish one state religion as well as ensures the free exercise of religious faith by all people.”

A pretrial hearing on a motion to dismiss the case is set for Sept. 16.