An A-10 Thunderbolt II unit summoned into the dense, urban environment of Raqqa, Syria, where Islamic State fighters and snipers hid within buildings, found itself testing new ways to support U.S.-backed militia on the ground, contributing to the city's liberation in late 2017 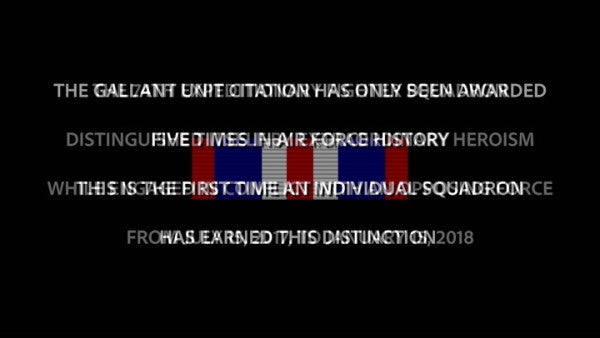 Members of the 74th Expeditionary Fighter Squadron were accustomed to the conflict conditions of Afghanistan, in which airstrikes aren't often carried out in close quarters.

But one A-10 Thunderbolt II unit summoned into the dense, urban environment of Raqqa, Syria, where Islamic State fighters and snipers hid within buildings, found itself testing new ways to support U.S.-backed militia on the ground, contributing to the city's liberation in late 2017.

For that, the 74th EFS, out of Moody Air Force Base, Georgia, recently received the Gallant Unit Citation, becoming the first individual squadron to receive the recognition. It marks only the fifth time the Air Force has given the award since creating it in 2001, according to a news release.

Gen. Mike Holmes, head of Air Combat Command, presented the squadron the award for its deployment in support of Operation Inherent Resolve (OIR) during a ceremony at Moody on March 14.

“The Gallant Unit Citation is the second-highest honor that can be bestowed on an Air Force unit,” Holmes said. “How many … have lived up to that since we created it? You're the fifth one. It's quite an award, and it's something you can be really proud of as a team,” he said, according to the release.

The Cold War-era A-10 is known for its iconic gun designed to shred tanks and its tough titanium armor designed to take hits and keep flying. But during this six-month operation, the pilots tried to strike snipers in “this dense, urban city” sometimes without eyes directly on the hidden fighters, said Lt. Col. Craig Morash, 74th EFS commander. That included fighters weaving through buildings and narrow roadways.

Precision was critical to avoid friendly or civilian casualties.

“We all thought we knew what we were getting into, … I'm getting nine lines saying, 'Hey I need you to drop this four-story building in a city,' which is fundamentally different from what we, or what I expected, certainly,” added Maj. Michael Dumas, an A-10 pilot with the squadron, in a video segment explaining the mission.

On his third combat run over enemy territory, Capt. Matthew Underwood, an A-10 pilot and team lead, said he and his wingman “ended up shooting a maverick into a building to get the sniper team that was firing” on the Syrian Democratic Forces below, allowing the pilots to witness just what the A-10 can do, even against larger structures. Taking out ISIS fighters' hiding spots became a way to protect friendly forces.

The unit's airstrikes killed 3,100 ISIS fighters, according to the release.

“Danger-close engagements, typically a rarity, were the daily norm,” Morash said in a separate news release. “As close-air support pilots, we would rather put our lives on the line than risk injuring a friendly on the ground. To avoid our greatest fear, we had to be perfect on every weapons pass … all 4,100 of them.”

According to the award citation, using only 12 A-10 aircraft throughout the deployment, “the 74 EFS struck 44 percent of all targets in OIR, which resulted in the liberation of Raqqa, the decimation of ISIS war-making revenue streams, and the elimination of ISIS from 99 percent of Iraq and Syria.”

That said, Airwars, a London-based non-profit group that tracks air conflicts against ISIS and other groups in Iraq, Syria and Libya, estimates the assault on Raqqa alone may have killed at least 1,800 civilians.

The Gallant Unit Citation is awarded to units that exemplify “extraordinary heroism in action against an armed enemy of the United States while engaged in military operations involving conflict with an opposing foreign force on or since 9/11,” according to the Air Force.

“The 74th … eagerly launched on every mission knowing they were going to be strapped into their jet for over 10 hours under difficult circumstances,” Morash said. “They fought ISIS courageously, never turning from a fight and frequently asking to be extended to provide whatever support possible to friendly forces. They upheld the legacy of the Flying Tigers and succeeded at one of the most difficult missions I have witnessed.”

WATCH NEXT: An A-10 Warthog Makes A Belly Landing