Reality Leigh Winner should be released from jail pending her trial in the National Security Agency leak investigation because new... 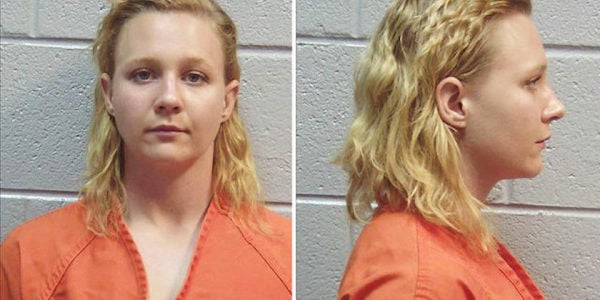 Reality Leigh Winner should be released from jail pending her trial in the National Security Agency leak investigation because new information has surfaced that weakens the government’s case for keeping her behind bars, her attorneys are arguing in new court papers.

Winner, 25, the first accused leaker to be prosecuted by the Trump administration, is scheduled to ask for her release at a hearing in Augusta, Georgia, at 10 a.m. Friday. The former Air Force linguist has pleaded not guilty to a charge of leaking an NSA report about Russian meddling in the 2016 presidential election to The Intercept, an online news publication. She worked as a federal contractor in Augusta.

In arguing for her to be kept in the Lincoln County Jail in Lincolnton, Assistant U.S. Attorney Jennifer Solari told a judge Winner was recorded in a jailhouse phone call discussing some “documents” — plural — raising concerns she might have gathered other top-secret information beyond the NSA report she is accused of leaking. Solari said she was also overheard directing the transfer of $30,000 from her savings account to her mother’s account because the court had taken away her free appointed counsel.

But in an email to Winner’s attorneys on June 29, Solari said Winner could be heard in the recording telling her mom she “leaked a document,” singular. And in another recorded phone call, Solari said, Winner asked her mom to transfer her money because of fears authorities “might freeze it.” Winner’s attorneys said she was afraid she would not be able to pay her bills if her account were frozen.

“I proffered information about the other jail calls based upon verbal summaries I was provided by the FBI just before the hearing,” Solari wrote. “Now that I have heard the recordings myself, I’d like to clarify some of the information for the court and counsel.”

In arguing for Winner’s continued detention on June 8, Solari also told a judge that Winner at one point improperly plugged a flash drive into a top-secret computer — in a sort of test run — while she was still in the Air Force last year. Winner’s attorneys pointed out she has not been charged with any additional crimes, though federal authorities have presumably completed their investigation of that incident.

Winner’s attorneys are also citing other cases in which accused leakers have been allowed to remain free pending their trials, including retired Gen. David Petraeus, who resigned as CIA director in 2012 before pleading guilty to a misdemeanor charge of mishandling classified materials. Further, Winner’s attorneys said, Winner has no prior criminal convictions, and she could be held behind bars far longer than the court had initially contemplated because her trial date has been postponed from Oct. 23 to March 19.

A spokesman for the federal prosecutors in the case did not immediately respond to a request for comment Sunday.

If the judge were to free Winner pending trial, her attorneys said, the court could require Winner to reside at her home in Augusta, not travel beyond Richmond County without permission, regularly keep in contact with a pretrial services officer and have her parents post their property as bond. She wants to return to teaching yoga and spin classes as well as volunteering in a local animal shelter, court records show.

Meanwhile, her attorneys are raising concerns about her health behind bars. They said Winner, who keeps a vegan diet, has developed “gastrointestinal issues” in the Lincoln County Jail.

“Ms. Winner’s continued detention,” her court filing says, “is manifestly unjust, contrary to law, and not in accordance with the presumption of liberty.”