The American Civil Liberties Union on Wednesday sued the Trump administration, saying it illegally detained military veterans and other protesters in Portland, Oregon, and used excessive force to try to silence supporters of the Black Lives Matter movement 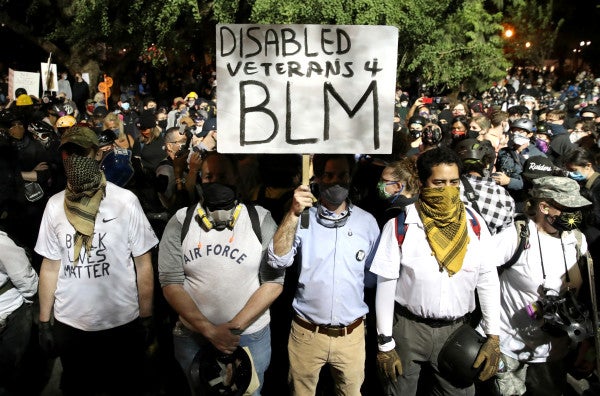 WASHINGTON (Reuters) – The American Civil Liberties Union on Wednesday sued the Trump administration, saying it illegally detained military veterans and other protesters in Portland, Oregon, and used excessive force to try to silence supporters of the Black Lives Matter movement.

It is the latest in a series of lawsuits the ACLU has filed over the federal response to weeks of anti-racism and anti-police brutality protests in Portland that at times erupted in arson and vandalism. President Donald Trump's administration sent in federal agents to respond to the protests.

“President Trump … and this administration have attempted to silence a movement that dares to realize the American dream of a nation where everyone, not just white people, can live free,” said Kelly Simon, interim legal director of the ACLU of Oregon.

The lawsuit was filed in federal court on behalf of 10 veterans, including the Wall of Vets co-founders Duston Obermeyer and Christopher David, as well as Mark Pettibone, who said last month that unmarked federal agents in Portland pulled him into a van.

Among other lawsuits previously filed by the ACLU are one to protect journalists and legal observers who were targeted during the protests and another challenging the government for allegedly attacking medics.

The ACLU also singles out Department of Homeland Security acting Secretary Chad Wolf, saying he lacked authority over federal agents in Portland because the department did not follow the proper chain of succession following the departure of Secretary Kirstjen Nielsen in 2019.

The claim that Wolf lacked authority comes after the Government Accountability Office earlier this month found Wolfe was improperly appointed. The White House called the finding both “wrong” and “laughable.”