When Dr. Sam Foote blew the lid off of the corruption and wait lists at the Veterans Affairs hospital in... 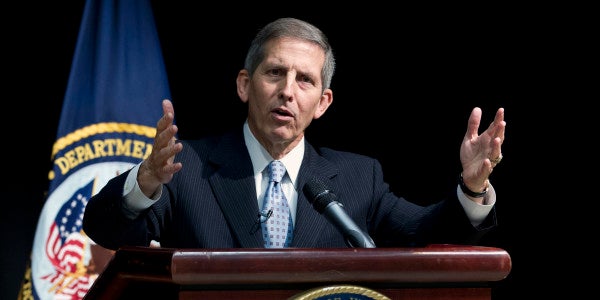 When Dr. Sam Foote blew the lid off of the corruption and wait lists at the Veterans Affairs hospital in Phoenix, it triggered a firestorm that culminated in VA Secretary Eric Shinseki’s resignation and led to a nationwide call to fix the chronically troubled department. But Foote, and many other whistleblowers who followed him, say they faced a culture of intimidation and retribution from their decision to shed light on the troubles.

Dr. Jacqueline Brecht, a former urologist at the Anchorage VA hospital, was put on administrative leave and escorted out by security after complaining about phantom appointments and secret waitlists in 2008. Dr. Ram Chaturvedi’s complained about systemic medical negligence at the Dallas VA hospital in 2008, and was told to let it go. He did not, and was fired for being disruptive in 2010.

These are just a few of the VA employees who have run afoul of an administration determined to keep them from rocking the boat, and acting VA Secretary Sloan Gibson has said he will not tolerate it under his watch. During a press conference at the Baltimore VA hospital on Tuesday, Gibson preemptively stated: “I’m going to anticipate the question and speak about it. I’ve said on a couple occasions it is against the law to retaliate against whistleblowers. Period. To me it is more fundamental than just obeying the law. First of all, one of our core values at VA is respect. From my perspective, when you are intimidating an employee or retaliating against an employee, you are not treating that person with respect.”

The VA’s Office of the Inspector General has its own anonymous tip line, through which it claims to receive roughly 30,000 complaints a year. But the private watchdog organization Project on Government Oversight is facing a subpoena demanding the names of its sources, sparking both ire in both Congress and other watchdog and veterans organizations.

In May, POGO partnered with Iraq and Afghanistan Veterans of America to start a secure website called VAOversight.org for anonymous whistleblowers to report waste, fraud, and corruption at the VA. On May 30, the same day that Shinseki stepped down, POGO received a subpoena from the VA Office of the Inspector General. The text of the document read: “We are requesting all records that POGO has received from current or former employees of the Department of Veterans Affairs, veterans, and other individuals and entities relating in any way to wait-times, access to care, and/or patient scheduling issues.”

But Joe Newman, a spokesman for POGO, told Task and Purpose that “it has never been our position to obstruct the VA, and we support the IG, and we support them trying to find out what the problems are … We exist to identity problems as well as recommend some solutions. The problem is that they want us to turn over the names of the people as well.”

Republican Sen. Tom Coburn agrees, and sent a letter to the inspector general asking for reconsideration of the subpoena. “The OIG’s actions may deter whistleblowers from coming forward to disclose information … I’m sure you would agree that the VA needs more whistleblowers to come forward to assist in learning what happened. Unfortunately, the timing of this subpoena may have a negative impact.”

In a written response to Coburn on June 13, acting VA Inspector General Richard Griffin stated: “What POGO has received through its hotline are mere allegations. Because the VA OIG is the only entity that has the statutory authority to obtain all records and interview all individuals to verify or refute allegations, we sought information from POGO to include in our investigation. It is irresponsible for any private organization, such as POGO, to report mere allegations as fact.”

Paul Rieckhoff, CEO and founder of IAVA, issued a statement decrying the inspector general’s actions, saying, “We are disappointed that the Inspector General, instead of focusing on fixing problems at the VA, is taking actions which could have a chilling effect on exposing the problems in the first place.”

While speaking at the Baltimore VA, a facility notorious for wait times for care that often exceed 80 days, Gibson said, “The people and their elected representatives expect us to be good stewards of the resources they allocate to us, and we have to continue to earn that trust. I think it’s pretty obvious we have seen an erosion of that trust.”

Considering the allegations of cover ups and intimidation, and the outcry over the inspector general’s subpoena for POGO’s sources, it’s fair to say the VA has a long way to go to regain that confidence. As of last Friday, the subpoena expired, and Newman said his own sources confirmed that the inspector general is contemplating further action. Trust goes both ways, and the Office of the Inspector General could start by showing it towards organizations that have the same goals and methods of reform as its own.