Five transgender service members serving on active duty sued President Donald Trump on Wednesday over his directive to ban them... 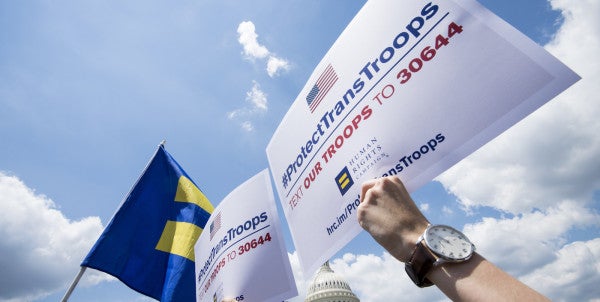 Five transgender service members serving on active duty sued President Donald Trump on Wednesday over his directive to ban them from the U.S. military.

It is the first legal action against the president’s policy change, which he announced in a series of tweets on July 26. The unnamed service members, who are referred to as “Jane Doe,” are serving in the Air Force, Army and the Coast Guard. Some have served as long as two decades, including tours in Iraq and Afghanistan.

The lawsuit, filed by the National Center for Lesbian Rights and GLBTQ Legal Advocates & Defenders, argues that reversing the Pentagon’s current policy is unconstitutional and denies transgender service members equal protection and due process. Transgender troops have been allowed to serve openly since June 2016.

“Nothing like this has ever happened before,” Shannon Minter, a transgender legal expert and NCLR’s legal director, told McClatchy. “This is not normal for a president to treat active service members this way. It’s unprecedented in the history of the military for a group to be embraced and included, and then purged.”

The policy has yet to be formally implemented, but the White House says it is working with the Defense Department on guidance.

“We have very serious reason to believe that they are moving forward with this new policy,” Minter said, arguing that transgender advocates can’t take a “wait-and-see” approach.

“These service members came out, relying on the (Pentagon’s) policy and now they have just been blindsided,” he said. “They are facing immediate choices about training, re-enlistment, health care and their families. How are they supposed to make these choices given the drastic uncertainties now hanging over their heads?”

The service members’ attorneys are asking a federal court in Washington, D.C., to immediately block any change to the current policy.

There are between 1,320 and 6,630 active-duty transgender individuals currently in the military, about 0.05 percent of the total active force, according to a RAND Corp. analysis. Other studies put that number as high as 15,000.

“Our military must be focused on decisive and overwhelming victory and cannot be burdened with the tremendous medical costs and disruption that transgender in the military would entail,” Trump said in his tweeted announcement.

The military countered that until it receives official guidance from the White House “there will be no modifications to the current policy.”

“In the meantime, we will continue to treat all of our personnel with respect,” Gen. Joseph Dunford, the chairman of the Joint Chiefs of Staff, said last month.

After commissioning an extensive study on how it would affect the military, the Defense Department under former President Barack Obama lifted the ban on transgender troops serving openly last year. The study concluded that letting transgender people serve openly would have a “minimal impact” on both military readiness and health care costs.

“I was very relieved and came out as transgender to my commanding officers, who were supportive,” said one of the plaintiffs in the lawsuit. “My experience has been positive and I am prouder than ever to continue to serve. The military has been my life, but now I’m worried about my family’s future.”

The Pentagon did not immediately respond to a request for comment.

Trump’s directive was criticized by 56 retired U.S. generals and admirals last week, who argued that the ban “would cause significant disruptions, deprive the military of mission-critical talent, and compromise the integrity of transgender troops.”