Fort Bragg soldier Adam Benaway defended his title to earn first place in his class among more than 60 racers from across the United States and other countries in September at the SCCA's 2019 Nationals in Lincoln, Nebraska 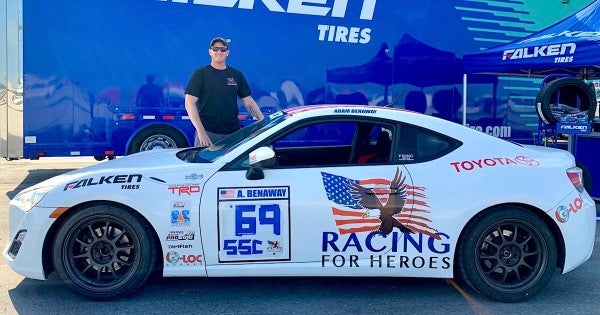 This year, Benaway defended his title to earn first place in his class among more than 60 racers from across the United States and other countries in September at the SCCA's 2019 Nationals in Lincoln, Nebraska.

With more than 1,300 drivers, the Solo Nationals is touted as “the largest amateur motorsports event in the world.”

“The competition was tougher as some more talent was drawn to the class after last year's success, but I was able to get it done again,” Benaway said.

Benaway participated in the Scion FR-S spec class, meaning every car is identical in that class, and that all drivers are on a level field.

His spec class is one of the top three that has the most participants at the SCAA annual event.

The focus is more on precision car control, while maneuvering through a course at high speeds with minimal error.

Leading up to this year's SCAA Nationals, Benaway said he only participated in five events within the past year, which meant less seat time at competitions compared to other drivers.

He said he felt added pressure to prove he earned last year's title, as drivers who've participated in multiple national championships were out in droves with the intent of beating him.

“This class probably has the most talent. … So it wasn't just an easy class,” he said.

And it was the competition that fueled Benaway to go back to the SCAA Nationals this year.

“I told my wife all I want is a national championship,” Benaway said, of when he first started competitive racing. “And she almost kind of held me to it … but you still want to prove the doubters and show that you can perform. Plus with me, it's an adrenaline fix.”

With a little more than three years left in the Army, Benaway aims to eventually move into larger racing series.

In the meantime, he is committed to being a soldier, racing and being a volunteer ambassador for the nonprofit group Racing for Heroes, which connects veterans to resources and encourages veteran outreach through racing.

Benaway, who's been stationed at Fort Bragg since 2003, got into racing after his first deployment in 2006.

Another soldier introduced him to the SCAA when he returned home.

“After that first deployment, racing kind of became my go-to fix,” Benaway said, describing himself as an “adrenaline junkie.”

Benaway heard about Racing for Heroes' founder, retired Army Special Forces soldier Mike Evock, through the Fayetteville dirt track, where Evock had raced. Benaway got connected to the organization through a mutual friend.

Benaway is part of the motorsports therapy outreach, which has Racing for Heroes members building teams.

“When somebody gets out of the military, they need that team-like structure,” Benaway said.

Benaway said he sees parallels between a racing team structure and military structure.

“In the military, you have your main guy who shoots or kicks in doors and guys who support him with food or fuel,” he said. “In racing, you have your driver, the crew chief, a tireman, a fuel man, so the structures are similar.”

Once getting out to a track, Benaway said there's a team strategy, with members determining when tires need rotated or brake pads are needed.

Representatives of the organization will participate in a car show held in conjunction with the Fayetteville Marksmen's car night Nov. 30, and Benaway said there will be a Dec. 7 open house at the organization's headquarters near the Virginia International Raceway.

“It's open to all veterans or anyone interested in being a partner … The doors are always open,” Benaway said.