Advocates and lawmakers attempting to shut down dog testing at the Department of Veterans Affairs have a new adversary –... 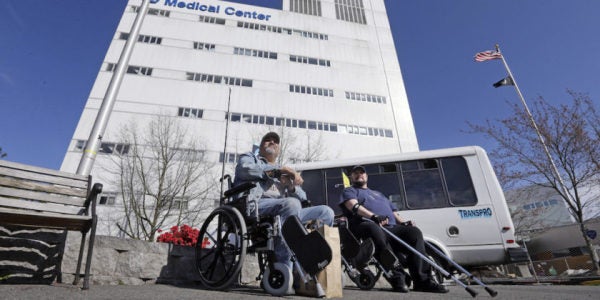 Advocates and lawmakers attempting to shut down dog testing at the Department of Veterans Affairs have a new adversary – a group of disabled veterans concerned that stopping the research would limit future medical advancements.

This week, though, Paralyzed Veterans of America, a veterans service organization, spoke out against it.

“We have an investment in research, period,” said PVA Executive Director Sherman Gillums. “There were so many benefits to research that weren’t considered when this bill was put out.”

In most instances of animal research, the VA uses mice or rats, Michael Fallon, the VA chief veterinary medical officer, said in a written statement. Dogs are used in some cases because of their physiological similarities to humans.

“VA’s animal research program has saved lives in the past and will save lives in the future,” Fallon said. “It’s important for people to recognize that canine research is essential to developing crucial medical advancements.”

Gillums said he was frustrated that the potential medical benefits for veterans weren’t raised in debate on the measure. He wrote an opinion column that was published this week in The Hill, with the aim of “filling in the gaps in understanding that lead to this bill.”

He wrote he represents “tens of thousands” of veterans with specialized needs who could benefit from advancements made through animal testing.

“We are the stakeholders,” Gillums said. “The catastrophically disabled veteran population, I think, might give balance to this discussion that they had without us in the room.”

Rep. Dave Brat, R-Va., who introduced the bill, took that message to the House floor.

“These dog testing experiments at the VA are consuming limited taxpayer dollars,” the congressman said. “My family had a Doberman, and he was part of our family. I can’t imagine conducting these kind of tests on man’s best friend.”

Earlier this year, White Coat Waste Project used reports of animal welfare violations at the Hunter Holmes McGuire VA Medical Center in Richmond, Va., to strengthen its case against any animal testing in government research. An Institutional Animal Care and Use Committee determined researchers at the McGuire VA failed to comply with federal humane care regulations, leading to the deaths of three dogs during experiments in 2016, reports obtained from the VA by White Coat Waste Project show.

Institutional Animal Care and Use Committees are oversight bodies that ensure experiments remain in compliance with federal policies on humane care for laboratory animals. Any facility using animals for federally funded research must have a committee.

Gillums argued the legislation passed by the House last month was an overreaction to those violations.

“I just think it went way too far,” he said. “I didn’t see a rampant violation of policy across VA.”

White Coat Waste Project also brought to light another proposed VA experiment in Los Angeles that would have involved giving 18 narcoleptic Dobermans antidepressants or methamphetamine. Researchers would then kill the dogs and study how the drugs affect the body’s response to allergens.

When Titus and eight other members of Congress from California questioned the experiment in June, the West Los Angeles Veterans Affairs Medical Center halted it.

Poe brought up the experiment when urging lawmakers to end dog testing.

A VA spokesman contended the research is humane, and that when the VA finds problems in its animal testing, “we report them, fix them and hold those responsible accountable.”