The most elite U.S.-trained forces in Afghanistan suffered a devastating defeat to the Taliban in what's often referred to as... 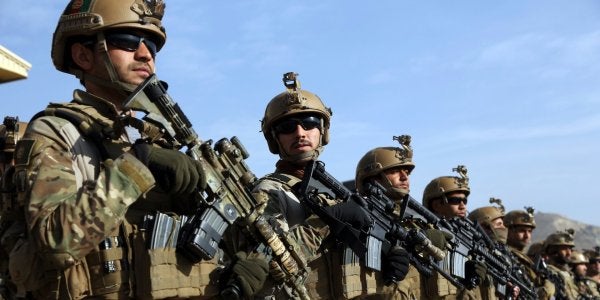 The most elite U.S.-trained forces in Afghanistan suffered a devastating defeat to the Taliban in what's often referred to as the country's “safest district” over the weekend, in yet another sign the war is a lost cause.

Early on Sunday, a company of roughly 50 Afghan special forces commandos was almost entirely destroyed in the rural district of Jaghori, according to a report from The New York Times.

Over 30 of the U.S.-trained commandos were killed, The Times said, in a district that is “famous” for how peaceful it is.

The scene in Jaghori's capital, Sang-e-Masha, was reportedly quite a depressing one following the fighting, as soldiers and policemen fought back tears as they piled bodies and bandaged commandos wandered the streets in “apparent despair.” Officials discussed the best escape plan as the Taliban surrounded the district, which is apparently on the brink of falling to the Taliban.

The U.S. has dedicated a massive amount of time and resources to training Afghan forces with the ultimate goal of ramping down America's role in a war it's been fighting for over 17 years — the longest in U.S. history.

In October, America's top general in the Middle East, Joseph Votel, expressed his confidence in Afghan security forces in terms of their ability to take on the Taliban.

But the Taliban has made major gains over the past year or so, and controls or contests 61% of the country's districts.

Last month, the Taliban took a shot at America's top general in Afghanistan, Gen. Austin “Scott” Miller, and barely missed. It also managed to wound another U.S. general in the process. During the same incident, a powerful Afghan police chief, General Abdul Raziq, was killed.

Beyond the Taliban, the Islamic State also has a foothold in Afghanistan and claimed responsibility for a suicide attack in the capital, Kabul, on Monday that led to at least six deaths and wounded more than 20 people.

The U.S. has spent nearly two decades, lost over 2,400 soldiers, and spent roughly $900 billion on this disastrous war. America is increasingly finding it difficult to justify the ongoing presence of 14,000 US troops in Afghanistan as the security situation there continues to deteriorate.