Afghan Troops Are Going AWOL From US Training More Than Ever

Afghan troops traveling to the U.S. for training are going absent without leave at double the previous rate, raising security... 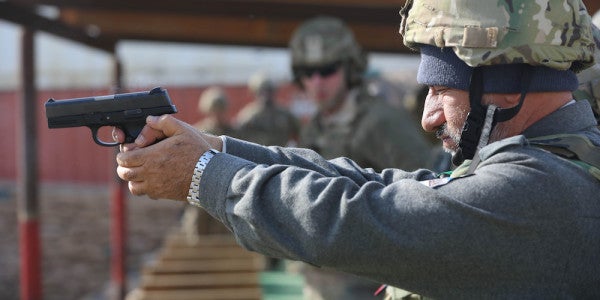 Afghan troops traveling to the U.S. for training are going absent without leave at double the previous rate, raising security concerns in their homeland as well as in the U.S., according to a Pentagon watchdog.

The percentage of Afghan trainees in the U.S. going AWOL doubled last year to 13 percent from the historical average of 6 to 7 percent, the U.S. Special Inspector General for Afghanistan Reconstruction said in a report on Oct. 20. AWOL means the trainee is absent from scheduled activities for more than 24 hours without proper authority.

Some of the missing trainees have never been tracked down and could pose a risk to the U.S., according to the report.

“Given the deteriorating security situation in Afghanistan and the fact that Afghan trainees who violate the terms of their visas suffer virtually no consequences for going AWOL,” the Defense Department believes that the AWOL rate is “is likely to either remain steady or increase,” the report said.

Through July, Congress has appropriated $68.27 billion to the Pentagon to train and equip the Afghan National Defense and Security Forces, which sends personnel to the U.S. to gain expertise in areas such as aviation and counter-drug efforts. Nearly 16 years after U.S. troops first arrived in Afghanistan to oust the Taliban government, the program is part of an effort to shift more responsibility for the country’s security to local forces.

From August 2005 through March of this year, a total of 253,977 foreign trainees arrived in the U.S. for training, according to the report. Of those, 2,537 were from Afghanistan. In that period, 320 foreign trainees went AWOL, with 152 of them — almost half — being Afghan.

Among the 152 Afghan trainees who went absent, 83 fled the U.S. or remain unaccounted for. “The limited vetting of Afghan trainees, and the restrictions of the investigatory and asylum processes, may pose a security risk to the United States when trainees go AWOL,” the inspector general said.

In interviews with those who left, researchers said trainees most often cited personal and family safety concerns as well as perceived job insecurity in Afghanistan as reasons.

Those who have run off during their training also “have hindered the operational readiness of home units,” because it’s led to a reduction in courses being offered to Afghan troops, the report found.

“It is clear that Afghan trainees go AWOL while in the United States at a far higher rate than do trainees from any other country,” John F. Sopko, the special inspector said in an Oct. 19 letter to the secretaries of defense, state and homeland security. The State Department and other agencies “should use all the tools at their disposal to reduce these occurrences and ensure that Afghan trainees return to Afghanistan and make use of the substantial U.S. taxpayer investment in training.”