In a significant setback, an Afghan War veteran and green card holder who later served time in prison on a... 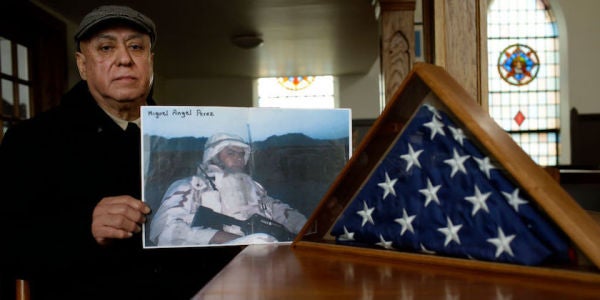 In a significant setback, an Afghan War veteran and green card holder who later served time in prison on a felony drug conviction has been denied citizenship, immigration officials said Thursday.

But despite the hopes of Perez and his backers, including U.S. Sen. Tammy Duckworth, his bid was denied.

“To be eligible for naturalization, you must demonstrate that you are a person of good moral character,” the letter from U.S. Citizenship and Immigration Services said. “Because you have been convicted of an aggravated felony on or after Nov. 29, 1990, you are unable to demonstrate good moral character; therefore you are permanently ineligible for naturalization.”

Chris Bergin, the attorney for Perez, was called back to the immigration offices hours after the interview and handed the decision in a sealed envelope.

“It said they were denying him citizenship based on a lack of good moral character — once again the drug conviction,” said Bergin, adding that he would appeal the ruling. “So I went and talked to Miguel and gave him the bad news. He was disappointed, obviously. But he said, ‘I’m not giving up. We’re going to keep fighting.’”

The ruling is not the end of Perez’s long-running battle to remain in the U.S., though it represents a significant defeat. Last month, Duckworth, an Illinois Democrat, used a little-known legislative maneuver by introducing a private immigration relief bill for Perez, who served two tours in Afghanistan but has no access to veteran benefits and has been ordered to return to his native Mexico.

Private bills, which are intended to help specific individuals, have been introduced by dozens of members of Congress this past year. Their success rate is generally low.

“Mr. Perez has been detained for months, separated from his family and left without access to the care he needs, deserves and has earned,” Duckworth said Thursday. “If the military and our government hadn’t failed Mr. Perez multiple times, he’d never have been in this predicament to begin with. He earned the opportunity to remain in this country when he vowed to defend it in our military, but today’s decision is yet another example of our nation failing him once more.”

“This is an awfully sad day in Chicago and our nation,” Rush said in a statement. “Miguel Perez Jr. bravely served our country in America’s longest war and today he was denied the privilege of citizenship after selflessly fighting for our shared American values. This is immoral.”

Perez enlisted in the military before 9/11 and served until 2004, Duckworth said this week in a letter to the top official for the Chicago district of U.S. Citizenship and Immigration Services. Perez was deployed to Afghanistan and served with the 2nd Battalion 3rd Special Forces Group, where he participated in numerous classified missions, Duckworth said.

After his military service, Perez sought treatment at the Veterans Affairs hospital in Maywood, where doctors diagnosed him with post-traumatic stress disorder.

He was supposed to return for more tests to determine whether he also had a traumatic brain injury.

In the meantime, he reconnected with a childhood friend who provided free drugs and alcohol.

On Nov. 26, 2008, while with that friend, Perez handed a laptop case containing cocaine to an undercover officer. Perez pleaded guilty to the drug charge and served half of a 15-year prison sentence.

While Perez was convicted of delivering less than 100 grams of cocaine, prosecutors have said he was arrested for delivering much more and received a reduced sentence after a plea deal.

Prosecutors also pointed out that Perez was given a general discharge from the military after a drug infraction.

Perez said he discovered the citizenship oversight when he was summoned to immigration court shortly before his September 2016 release from Hill Correctional Center in Galesburg, Ill.

Instead of heading home to Chicago from prison, Perez was placed in the custody of Immigration and Customs Enforcement and transferred to a Wisconsin detention center for immigrants awaiting deportation.

When legal residents or people who are here illegally commit crimes, ICE's standard protocol is to let them serve most of their sentence for the crime in the U.S., then deport them.

While in ICE custody, Perez this year went on a hunger strike that has since ended. He was transferred to a detention center in Kankakee after the center in Kenosha placed him in solitary confinement.

In an interview from the center in Kankakee where he is now detained, Perez said he would defend the U.S. again in a heartbeat. Though the system is not perfect, he said, the laws and Constitution are worth fighting for.

“I went through the system because I knew the system was going to come back and look out for me,” he said. “It's the people who get into difficult positions. That’s not the Constitution or the country’s fault.”