A massive 2,000 year old treasure trove is missing in Afghanistan and the Taliban is hunting it down

This time, there is no map on the back of the Declaration of Independence 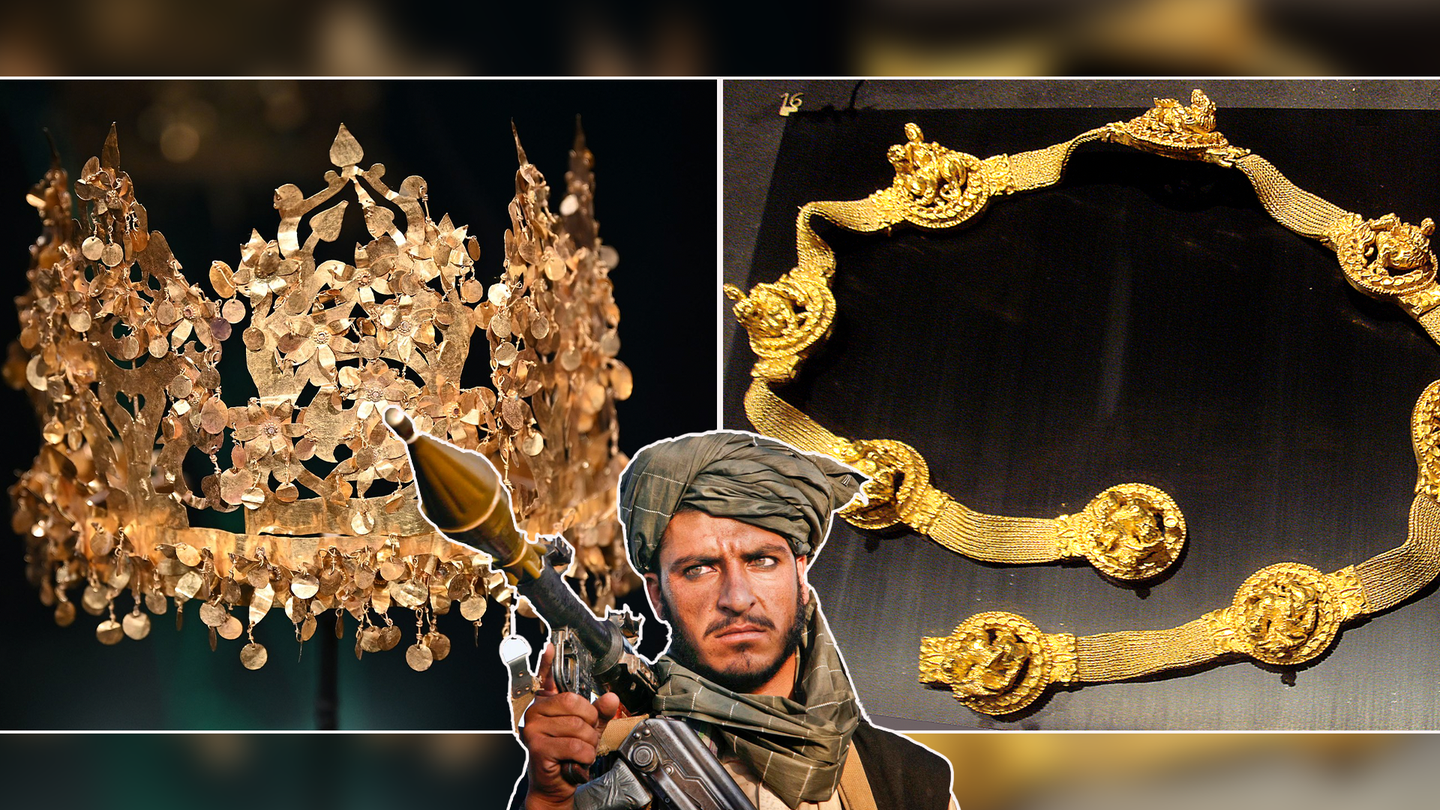 There is a massive 2000-year-old gold treasure missing in Afghanistan and the Taliban is trying to find it.

Known as the “Bactrian Treasure” or “Bactrian Hoard,” it is roughly 21,145 pieces of gold in the form of jewelry, coins, weapons, crowns, and other items adorned in gems and jewels. The priceless collection is known as one of the largest collections of gold in the world and represents the history and culture of the Ancient Silk Road.

The treasure was unearthed in 1978 and 1979 from six nomad burial tombs for five women and one man, about a two-hour car drive west from Mazar-i-Sharif. A team of Soviet and Afghan archaeologists found the site outside of Sheberghan in northern Afghanistan, known to locals as “Tillya Tepe,” or Hill of Gold, which was once situated on vital trade routes in the ancient Greco-Bactrian Kingdom that formed around 300 B.C. during Alexander the Great’s rule.

One of the tombs was for a young woman in her thirties who was described as a “nomadic princess” by Viktor Sarianidi, the Soviet leader of the dig. Inside were Roman coins minted in the first century A.D. in modern-day Lyon, France, daggers with Siberian bears on them, an Indian medallion with an early depiction of Buddha, intricate golden belts, and a 5-inch tall gold leaf crown that even folded for transport. Items from every corner of the European and Asian continents are represented in the collection and provide incredible insight into the trade routes and culture that existed at the time.

After the treasure was unearthed, it was whisked away to the Kabul National Museum for safekeeping and was rarely shown, according to The New York Times. As the Soviet occupation dragged on and fighting became more regular around Kabul, officials became worried and decided to move it to the presidential palace, known as the Arg, and then a few years later to a vault three stories underground. Only a handful of people knew of its existence.

When the Soviets withdrew from Afghanistan in 1989, rumors of the treasure’s whereabouts began to swirl. Many thought the treasure was taken by the Soviets, while others believed it was melted down and sold for weapons or sold on the black market intact. Those who knew kept quiet, having taken an unofficial oath to safeguard the treasure.

After the Taliban emerged victorious amid a post-Soviet civil war in 1996, many artifacts disappeared from the Kabul National Museum. Omara Khan Masoudi, who served as the Afghan Museum director, estimated that during the chaos that ensued roughly 70% of the items in the museum were stolen by looters and likely made their way to the black market. Though some have been recovered, most are likely gone forever.

The few people who knew of the Bactrian treasure’s location were tight-lipped and for good reason. The Taliban became well-known for the destruction of ancient artifacts and sites that did not conform to their fundamental interpretation of Islam. In 2000, artifacts in the museum were ruthlessly destroyed by senior Taliban officials one-by-one as museum staff begged them to stop. And the group famously destroyed the two Buddhas of Bamian which reached as high as 180 feet and were carved in the sixth century. Having stood for 1,500 years, they were brought down by machine guns, rockets, and dynamite in March 2001.

Shortly after the terrorist attacks on Sept. 11, 2001, and with U.S. and allied forces closing in on Kabul, Taliban officials went to the presidential palace where the vault held the country’s foreign reserves and the priceless treasure, though they didn’t know it was there. Armed with AK-47s, Talibs demanded to be let in.

Ameruddin Askarzai was a central bank official at the time and one of the few who knew of the treasure’s location. According to a Wall Street Journal report, with a gun pointed at his head, he opened the vault and moved aside to let the Taliban inspect the gold and silver foreign currency reserves. At the back of the vault was another door, behind it lay the Bactrian Treasure. A Taliban official asked Askarzai what was behind the door and he responded “Ceramic handicrafts,” risking his life to protect the treasure. The Taliban left without opening it.

After the Taliban left Askarzai inserted the key into the vault lock and broke it off, according to the Journal report. Soon, with the American forces closing in, the Taliban returned to find the vault inaccessible, sending them into a rage. After threatening Askarzai and shooting their guns in the air they left, taking $4.5 million and him to jail. Askarzai spent more than three months in jail and was regularly beaten by Taliban guards until Hamid Karzai, president of the new western-backed Afghan government, released him and gave him a job issuing money from the central bank.

Out of prison and back to the vault, Mr. Askarzai had a locksmith remove the broken key and open the vault, and the new government took stock of their reserves. The whereabouts of the Bactrian Treasure were still kept under wraps as it sat in inconspicuous sealed cardboard boxes, the location made known only to a select few. Rumors once again swirled.

In 2004, with the country relatively secure and Kabul under control, about 30 people were finally able to view the treasure for themselves, according to The Smithsonian. With the key missing, a saw was used to open the vault and reveal its secrets. With this, the silent guardians of the treasure were now relieved of their duty. It would be photographed, documented, and studied over the next several years.

From 2007 to 2020, items from the treasure traveled the world, visiting 13 countries while showcasing Afghanistan’s rich history. In February 2021, the Afghan government placed the treasure on display at the presidential palace. That same month, anticipating their coming success, the Taliban released a statement saying they had an “obligation to robustly protect, monitor and preserve” items that were important to Afghanistan’s heritage.

Kabul fell back into the hands of the Taliban less than six months later, the Afghan government collapsed, and the fate of the Bactrian Treasure and 800,000 other items in possession of the National Museum was again called into question.

Now, unlike in 1996, the Taliban is aware of the treasure and is actively hunting for it. It remains unknown if the treasure is even in Afghanistan, but nobody has said anything publicly about it. There appears to be another generation of silent protectors keeping the true location a secret.

“The issue is under investigation, and we will collect information to know what the reality is,” said Ahmadullah Wasiq, the Taliban’s deputy head of the  Cultural Commission of the cabinet. “If it has been transferred (out of Afghanistan), it is a treason against Afghanistan. The government of Afghanistan will take serious actions if this and other ancient items are moved out of the country,” he said.

The ancient treasure, which lay dormant for 2,000 years, now enters a new chapter in its life which, like Afghanistan, has been filled with such heartache and turmoil since 1978 when it was first discovered.