Almost 16 years after the U.S.-backed ouster of the Taliban, Afghanistan remains in the grip of a war with “shockingly... 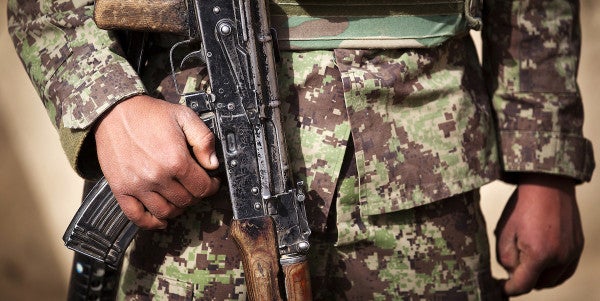 Almost 16 years after the U.S.-backed ouster of the Taliban, Afghanistan remains in the grip of a war with “shockingly high” death rates among security forces and a record number of casualties among civilians, according to the U.S. government watchdog monitoring the country’s reconstruction efforts.

Civilian casualties rose to 11,418 last year, the highest since the United Nations began keeping records in 2009. In the first six weeks of this year, 807 Afghan soldiers were killed, John Sopko, the U.S. special inspector general for Afghanistan reconstruction, said in a quarterly report to Congress issued late Sunday.

Sopko’s report provides a reality check for the Trump administration and Defense Secretary James Mattis, who visited Afghanistan in April ahead of an expected recommendation to President Donald Trump about future troop levels and strategy.

The Obama White House announced in July that 8,400 U.S. troops would remain in Afghanistan into this year rather than cutting the force to 5,500 as originally planned. Now, that number could increase by several thousand if Trump is persuaded by his generals to send more troops.

“Afghan military and police forces have grown, taken lead responsibility for the country’s security, and show increased effectiveness,” Sopko said in the report. “Yet serious problems persist. A dangerous and stubborn insurgency controls or exerts influence over areas holding about a third of the Afghan population.”

The situation has only worsened since the report was completed. It doesn’t include more than 140 Afghan troops killed and 150 wounded in a five-hour-long suicide attack at an army base on April 21. Afghanistan’s defense minister and the chief of army staff resigned after the assault on the army base in northern Balkh province, the Taliban’s deadliest assault in 16 years.

Then, two U.S. Army Rangers were killed and another injured during a ground assault against Islamic State fighters on April 26. The U.S. deaths may have been the result of “friendly fire,” the Pentagon said last week.

Complicating matters, Russia may be providing support to Taliban forces, a move that prompted Mattis to say the U.S. may have to confront Moscow over “violations of international law.” Russian officials and the Taliban deny the accusations. Russia’s special envoy for Afghanistan, Zamir Kabulov, said in a March 30 interview that the charges are an invention by the Afghan government and its allies to “justify their own failure on the battlefield.”

Still, Russia has said it supports the Taliban’s demand for foreign troops to withdraw from the country. The Taliban’s widening control of key areas only makes it harder for the U.S. to extract itself from its longest-ever war.

The Afghan military has been responsible for providing security across the war-torn country since 2014, with NATO forces taking an advisory and training role. The U.S. first engaged in the country’s defense in late 2001, when the Taliban leadership at the time refused to extradite al-Qaida leader Osama bin Laden in the wake of the Sept. 11 attacks.

After more than two generations of conflict in the country, more than 660,000 people in Afghanistan fled their homes in 2016, the highest number of displacements on record and a 40 percent increase over the previous year, according to the U.S. report.

On April 13, the U.S. dropped a Massive Ordnance Air Blast bomb — nicknamed the “mother of all bombs” — the largest non-nuclear explosive in its arsenal, on Islamic State positions in Nangarhar province.

Amid Taliban gains and continued fighting by Islamic State, the security situation in Afghanistan is in a “stalemate,” the U.S. report said, citing comments by General John Nicholson, commander of U.S. and NATO troops in Afghanistan. Fighting has been particularly heavy in the key areas of Helmand, Nangarhar, Kandahar, Kunar and Ghazni. Additional troops and expanded authorities are needed to provide advisory support to Afghan forces, the report finds.

Narcotics traffickers continue to provide weapons, funding and material support to the insurgency in exchange for protection, while insurgent leaders traffic drugs to finance their operations, the report notes. The Taliban fund 60 percent of their activities through the illicit narcotics economy. Afghanistan remains the world’s largest opium producer, producing an estimated 80 percent of the world’s heroin.

Despite all the problems, with Trump vowing to “eradicate” Islamic State and the U.S. wanting to shore up the Afghan government, the administration may have little choice than to maintain or boost military support, analysts say.

“Host country security forces are not ready to do the job,” said Anthony Cordesman, a defense analyst with the Center for Strategic and International Studies, said in an interview before the release of the report. “We have to restructure the mission to provide more training and air support. To think that the Taliban are ready to negotiate is unrealistic.”

(With assistance from Eltaf Najafizada.)