The US Spent $8.6 Billion Fighting The Afghan Drug Trade — And Failed Miserably

In 15 years in Afghanistan, no counternarcotics effort undertaken by the U.S., it partners, or the Afghan government has led... 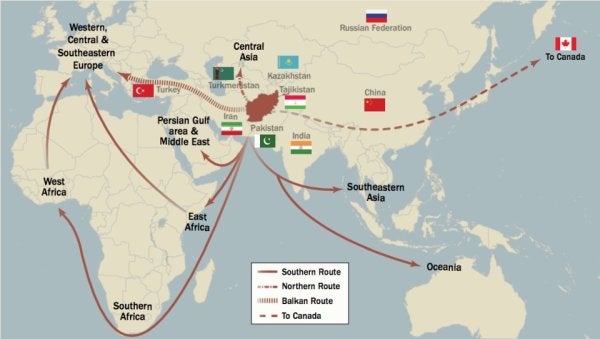 In 15 years in Afghanistan, no counternarcotics effort undertaken by the U.S., it partners, or the Afghan government has led to sustained reductions in poppy cultivation or opium production.

That was one of a number of findings of a Special Inspector General for Afghanistan report issued this week, underlining insufficient, uncoordinated, and at-times counterproductive initiatives in Afghanistan to reduce drug production there.

Between 2002 and 2017, the U.S. government has allocated roughly $8.62 billion to fight narcotics in Afghanistan. But the drug trade remains entrenched. Opium is Afghanistan's largest cash crop, reaching an export value of $1.5 billion to $3 billion in recent years. In 2017 alone, poppy cultivation was thought to support 590,000 full-time jobs — which is more people than are employed by Afghanistan's military and security forces.

Heroin and opium produced in Afghanistan are trafficked largely to Europe, Africa, and other parts of Asia.

The primary markets are Europe, Asia, and Africa. Opiates from Afghanistan travel through other Central or South Asian states — drug addiction has exploded in Iran, with opium making up two-thirds of consumption — to reach destinations in Europe and Asia. Drugs also travel maritime routes to Africa and Oceania.

Ninety percent of the heroin seized in Canada comes from Afghanistan, but scant amounts reach the U.S. — 1% or less of the drug seized in the U.S. can be traced back to the Central Asian country.

The amount of Southwest Asian heroin in the U.S. peaked in the early 1980s, according to the DEA. It was replaced by Southeast Asian heroin — largely from Laos, Myanmar, and Thailand — in the late 1980s and early 1990s.

The amount of South American heroin found the US started to increase in the mid-1990s, but by the late 2000s, Mexican heroin started to become predominant — in 2015 it was the more than 90% of the heroin seized in the US.

Opium has been cultivated in Afghanistan for centuries. It was under royal control from 1933 to 1973, but the Soviet invasion and occupation from 1979 to 1989 crippled the legitimate economy and allowed illegal enterprises and criminal networks to thrive.

Production soared after the Taliban took control of most of the country in 1996. But it banned the crop in 2000, leading to a 75% drop in the global supply of heroin but leaving farmers destitute, as no alternative to poppy cultivation was provided.

Cultivation was at a historic low in 2001, when the U.S. and its coalition partners invaded. Counterdrug work was done in the period that followed, but the vacuum created by the lack of functioning Afghan institutions limited their effectiveness.

Despite year-to-year variations, poppy cultivation in Afghanistan has steadily increased over the last 20 years.Special Inspector General For Afghanistan Reconstruction

2004 saw an increase in cultivation, which was followed by more concerted U.S. efforts to staunch it as well as increased counternarcotics efforts by coalition partners. Cultivation leveled off in 2009 and 2010 — around the time of the U.S.-led surge that brought more attention to combating the drug trade.

But cultivation started to rise in 2011, compounded by missteps and a reduced emphasis on counternarcotics. “From 2013 to 2016, drug production continued at or near the highest levels ever consistently seen in Afghanistan,” the report states. Recent years have also seen eradication stall.

A UN survey in 2017 found cultivation had hit a new high, covering more than 810,000 acres. (The Taliban has also expanded its involvement in the drug trade.)

2017 also saw a new Trump administration strategy that brought with it an “unprecedented” level of attention to Afghan drug production by U.S. military commanders, according to the report — marked by a “sustained air interdiction campaign” that included advanced aircraft striking rudimentary drug labs.

The increases in drug cultivation make clear the failure of counternarcotics efforts, the report says, but it stresses that those failures are not the only factors that have led to the increases.

“The exponential rise in opium poppy cultivation and drug production is rooted in far-reaching, persistent challenges in Afghanistan—namely, lack of security, a poor economy, weak governing institutions, and failures of the wider reconstruction effort,” the report states.

“Given these challenges, there are serious limitations to the U.S. capacity to bring about large-scale, lasting reductions in poppy cultivation and drug production,” it adds, noting the opium economy will continue to undercut U.S. efforts in Afghanistan.

“Therefore, ongoing U.S. reconstruction efforts must effectively address, or at least attempt to mitigate, the drug-related threats to Afghan security and stability.”

Counternarcotics: Lessons From The U.s. Experience In Afghanistan by Jared Keller