Families of Afghanistan fallen fear their memorials will be left behind

With a final U.S. pullout from Afghanistan possibly imminent, families of the fallen fear that combat-zone memorials may be lost for good. 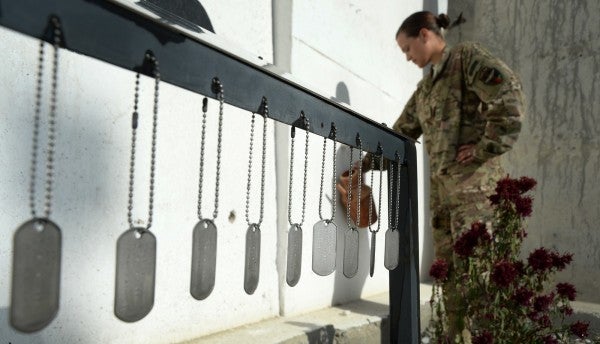 Inside Forward Operating Base Oqab in Kabul, Afghanistan stands a wall painted with a mural of an airman kneeling before a battlefield cross. Beneath it, a black gravestone bookended with flowers and dangling dog tags displays the names of eight U.S. airmen and an American contractor killed in a horrific insider attack at Kabul International Airport in 2011.

It's one of a number of such memorials ranging from plaques, murals and concrete T-walls scattered across Afghanistan. For the last eight years, those tributes have been proof to the families of the fallen that their loved ones have not been forgotten. But with a final U.S. pullout from Afghanistan possibly imminent, those families fear the combat-zone memorials may be lost for good.

“I think all the memorials for the NATC-A 9 should come back,” said Sally Stenton, a retired Air Force lieutenant colonel, using the term for those killed in the massacre. All served at NATO Air Training Command-Afghanistan.

“[The memorials] should go to the bases where they were deployed from or where they were stationed at some point in their career,” Stenton, who served as a legal adviser to the Afghan air force and staff judge advocate for the 438th Air Expeditionary Wing in Kabul, said in a recent interview. She is regarded as the “speaker for the families” because of her friendship with many of the victims.

“If they need to cut a wall out and bring it home, that's what they need to do. I think anything that has been dedicated to the nine to their memory needs to come back.”

No One Left Behind

The service members were all blindsided by the attack, unable to draw their weapons in self-defense against Gul, according to a U.S. Central Command AR 15-6 investigation conducted in 2013. At least three inquiries by the Air Force Office of Special Investigations and CENTCOM were conducted between 2011 and 2014. It is unclear whether there may be others.

As the Trump administration pushes for ways to downsize in Afghanistan — possibly even withdrawing all 14,000 troops stationed there — the parents, widows and friends of the NATC-A 9 want their memorials, including plaques and painted murals, brought back home.

The victims all served as part of the U.S. air adviser mission to the Afghans. They included:

Nylander, the last victim, left a nearby room at the center and attempted to stop Gul. Nylander died of gunshot wounds sustained during the shootout after his gun jammed, according to the AFOSI and CENTCOM investigations. He was posthumously awarded the Silver Star for valor.

The nine are memorialized stateside at the Air Advisor Memorial at Joint Base McGuire-Dix-Lakehurst, New Jersey.

But the families want assurances that their memorials in Afghanistan won't be forgotten, either.

Stenton said the next of kin should be given the option to take the memorials, if the Air Force doesn't want them.

“If they were left … I would guess they would be disrespected or defaced, or at least not taken care of,” said Larry Brodeur, father of David Brodeur.

For years, Suzanna Ausborn, a retired Air Force captain and widow of Jeffrey Ausborn, has gotten messages from friends who see Jeff's name when they deploy to Afghanistan. Jeffrey Ausborn, a C-130 pilot, taught Afghan troops how to fly cargo planes.

“One of the things that made it easier to get through in the early years of my husband's death was the fact that there were those memorials that people would send me pictures and updates of and, if someone was deploying, they take a picture and send it,” Suzanna Ausborn said in an interview with Military.com. “And there were a couple that just felt very real to me to see his name on a memorial in the country where he was killed.”

The Defense Department has yet to receive direction from the White House on any withdrawal scenario despite Trump calling a recent high-level adviser meeting on the subject. The U.S. has also recently held negotiations with the Taliban.

The talk of an urgent withdrawal spurred concerns from Jeff Ausborn's mother, Faye.

“If and when the U.S. pulls out, those memorials need to be brought back to the United States!” she said in an email.

“A lot of times, that stuff's brought home anyway; at least, that's what I've been told,” added Frank Bryant, father of Frank Bryant Jr. “I would expect that that would happen. I hope.”

Suzanna Ausborn said, “It would be tragic actually for them to be left there in the event that we would draw or be destroyed. It would almost feel to me as if, you know, their sacrifice … it just would be, you know, gone.”

Part of the uneasiness the NATC-A 9 families feel is rooted in uncertainty.

Years later, questions linger about what exactly caused Gul to turn on the airmen. Some families believe the Air Force didn't fully investigate; others believe the service is lying about how the event unfolded. Some cling to the idea that one day they will get the closure they're owed.

“I think eventually we will have closure, but right now myself and some other family members we haven't received the honest-to-God real storyabout what happened to our loved one. Maybe we never will,” Suzanna Ausborn said, referring to the theory that the service covered up how Gul was able to shoot so many with his 9 mm Smith and Wesson in such a brief time, and whether he was previously perceived as a threat.

The Taliban took responsibility for the shooting, but follow-on investigations found no link between Gul and the extremist group

But if a U.S. withdrawal is imminent, would bases be turned over to the Afghan armed forces much like Camp Leatherneck was in 2014? Would sprawling monuments be considered mission-critical to haul back on Air Force cargo planes?

“Whatever is there, whatever's been done has been done,” Larry Brodeur said. “I just see no likelihood they would be preserved or respected.”

It's unknown how many memorials to the fallen there are throughout Afghanistan.

The formal memorial to the NATC-A 9 at Forward Operating Base Oqab “could be one of many meant to honor NATC-A,” Maj. Beth Riordan, spokeswoman for U.S. Central Command Communication Integration, told Military.com in an email.

“Honoring our fallen is our most solemn and important duty. There are multiple memorials and tributes throughout Afghanistan, and while some are formally recognized and well known, many more are not. These memorials can range from bases named after heroes to simple markers in the ground,” Riordan said.

She said a Global War on Terror memorial in Washington, D.C., is long overdue. She also feels the NATC-A 9 families are a small community that lacks an identity, making their connection to the memorials in Afghanistan particularly strong.

“I'm not sure exactly what little group I fit into,” Ausborn said. “I think special forces have their own groups. The fighter pilot community, they have a very tight group. But … if the Air Force leadership made it more of a priority to recognize the sacrifice at a higher level, I think that would be better.”

She continued, “I just don't feel like there's an Air Force organization that says, 'OK, everyone that you know was lost in Afghanistan or even the NACT-A 9, we're going to have something in [Washington], D.C., you know, kind of like how the Vietnam and Korea vets have.”

It hasn't been easy for her family to travel to the New Jersey memorial from her home in Arizona.

“I believe that having memorials in our nation's capital would make it more visible, and I think it would make more of a statement the loss of life that we've all had,” Ausborn said.