"Neither the Taliban hands nor their stained consciousness can be washed of the blood of women, babies & other innocent in the latest senseless carnage," Afghan Vice President Amrullah Saleh said on Twitter. 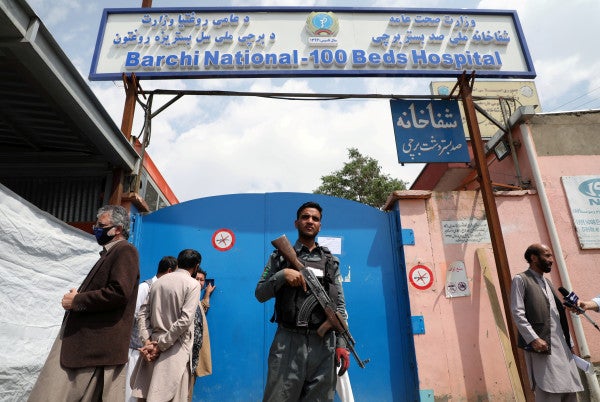 KABUL (Reuters) – Afghan officials on Friday blamed the Taliban for a bloody attack on a maternity hospital in the capital, Kabul, this week, rejecting a U.S. assertion that it was carried out by ISIS militants.

No group has claimed responsibility.

The Taliban, who struck a deal with the United States in February clearing the way for the withdrawal of U.S. troops and the end of America's longest war, denied responsibility.

U.S. Special Representative Zalmay Khalilzad, the architect of the pact with the Taliban, blamed Islamic State militants for the attack, saying they opposed any Taliban deal and sought to trigger an Iraq-style sectarian war in Afghanistan.

But Afghan officials in Kabul dismissed the Taliban denial.

“Neither the Taliban hands nor their stained consciousness can be washed of the blood of women, babies & other innocent in the latest senseless carnage,” Afghan Vice President Amrullah Saleh said on Twitter.

Saleh, a former intelligence chief, did not mention Khalilzad's assertion but said earlier some people were naive for accepting Taliban lies and blaming the “fictional” Islamic State faction in Afghanistan for the attack.

The Afghan affiliate of Islamic State, known as Islamic State Khorasan, after an old name for the region, first appeared in eastern Afghanistan in 2014, and has since made inroads into other areas.

The Islamic State militants, who battle government forces and the Taliban, and have claimed some of the deadliest attacks in urban centres in recent years, and will not be part of the deal between the United States and the Taliban.

The group did claim another attack on Tuesday, a suicide bomb attack on the funeral of a policeman in the eastern province of Nangarhar in which 32 people were killed.

A senior Afghan government official said the patterns of recent attacks showed the involvement of the Taliban and the affiliated Haqqani Network, whose head, Sirajuddin Haqqani, is the deputy chief of the Taliban, in the Kabul attack.

The official, who declined to be identified questioned Khalilzad's assessment as “premature” adding that all the evidence suggested it was not Islamic State who carried out the raid on the hospital.

The Taliban, who condemned the hospital attack, said the Afghan government had attempted to pin the blame on them “without any expert investigation”.

A spokesman for the group called for a “transparent and impartial investigation” to find the perpetrators.

President Ashraf Ghani ordered the military to switch to “offensive mode” against the Taliban in response to Tuesday's violence, presenting another setback to U.S. President Donald Trump's plans to bring the troops home.

The comments by Khalilzad, who has already been criticised in Afghanistan for what some see as his rush to push the deal with the Taliban, angered parliamentarians, some of whom went as far as calling for him to be banned from entering the country.

“We will start collecting signatures and ask for a proper session in the parliament regarding the peace process and Khalilzad,” independent parliamentarian, Belqis Roshan, told Reuters.