"I tried to get someone to define for me what winning meant, even before I went over, and nobody could" 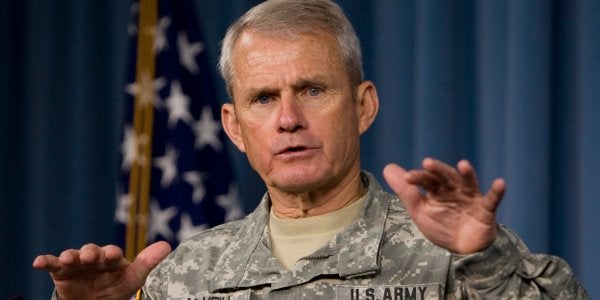 The United States has been fighting in Afghanistan with no clear strategy for nearly two decades, a collection of documents obtained by The Washington Post reveal.

“I tried to get someone to define for me what winning meant, even before I went over, and nobody could,” retired Army Lt. Gen. Dan McNeill, who served as the commander of American and coalition forces in Afghanistan told U.S. government interviewers, the documents show.

The Post's “
Afghanistan Papers,” a collection of over 2,000 pages of notes from interviews with more than 400 people directly involved in the war in Afghanistan, paint a grim picture of how officials kept reassuring the public of progress while privately harboring doubts about their mission and its chances of success — confirming what many observers have suspected for years.

Not only did the U.S. and its partners have an undefined mission, but it also lacked a sufficient understanding of the Afghanistan. As a result, the U.S. sacrificed thousands of lives and wasted nearly a trillion dollars trying to stabilize a country that remains unstable today, The Post
reports.

Suicide bombers struck the main U.S. military base — Bagram Air Base — in Afghanistan Wednesday, killing one person and injuring dozens of others. The Taliban, the Islamist insurgent force with which the U.S. is trying to achieve a negotiated peace, claimed responsibility for the attack.

Asked about the “Afghanistan Papers” Wednesday, Secretary of Defense Mark Esper simply
said he hasn't read all of them and is focused on moving “forward.”

The Pentagon has been largely unwilling to discuss the 18-year war in Afghanistan, America's longest armed conflict.

Gen. Austin Miller, the current commander of U.S. forces in Afghanistan,
will brief lawmakers Wednesday afternoon in a hearing closed to the public; there are no plans to discuss the war publicly, despite repeated requests from defense reporters.

“There has been no intent by DoD to mislead Congress or the public,” a Pentagon spokesman said in an emailed statement earlier this week after the Washington Post articles published. “DoD has been very clear that this war will not end on the battlefield.”

The spokesman added that “our military mission in Afghanistan is in support of diplomatic efforts to achieve a peace settlement.”